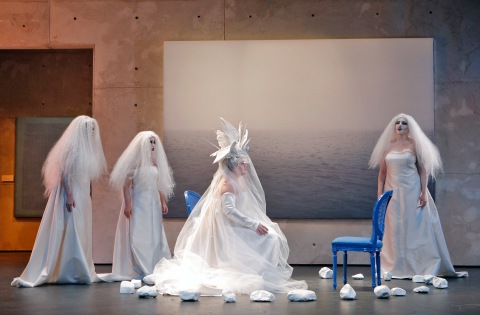 Every time I immerse myself in Strauss and Hofmannsthal’s Ariadne auf Naxos (and I do, often – decades ago, I even wrote a thesis about it), I think it’s the greatest opera ever written.

I never felt this more powerfully than last night at the Perelman Theater, in a thrilling co-production of Curtis Opera Theatre and Opera Philadelphia that honors both of these fine institutions. You will hear no more impassioned music making – nor see more dazzling theater – this season.

The achievement is that much more impressive because Ariadne is such a complex, even paradoxical, work.

Just a few of the things a director, designers, conductor and cast have to get right – Ariadne is a music drama of Wagnerian stature (and, for the two leading roles, Ariadne and Bacchus – Wagnerian vocal demands) that is also a diaphanous chamber piece. It layers several seemingly incompatible plots into an opera which is part farcical comedy, part sardonic satire, part romantic melodrama… and, at the core, a work of surpassing seriousness. (Pressed to summarize the theme of Ariadne in a sentence, I’d say it’s about nothing less than the tension between a fading old world and a presumptuous, socially and culturally mobile new one – and the survival of the fittest.)

The current mode favored by many opera directors is often to update period settings and references. That’s especially dangerous with Ariadne, which incorporates no fewer than three historical worlds – Greek antiquity (the mythic story of Ariadne and Bacchus, which here is a meta-opera seria); 16th century Italy (the flirtatious Zerbinetta, Ariadne’s nemesis, leads a commedia dell’arte troupe); and 18th century Vienna (where it all takes place).

There’s nothing random about this mélange. In fact, two of these settings (Greece, 18th century Europe) very specifically refer to other Strauss-Hofmannsthal operas.  Fiddle with this structure, and you’re asking for trouble.

Fiddle with it is exactly what director Chas Rader-Shieber does here, moving the period and setting to what I take to be a contemporary European performance space/art gallery, and even inserting a risky, popular culture wild card (I’ll say no more — you should discover it for yourselves).

But it works! Rader-Shieber’s substitution of a kind of artsy Euro-fabulousness feels simultaneously fresh, and evocative of the original. Never before have I seen the comedians’ entrance into the opera seria register with more punch. 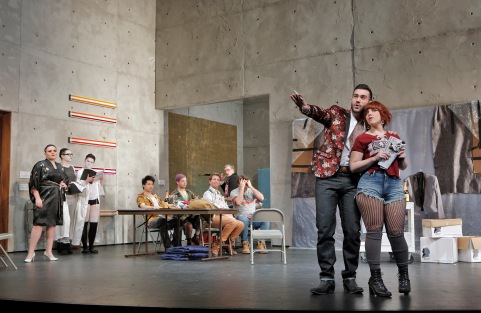 The Dancing Master (Roy Hage) and Zerbinetta (Ashley Milanese) and company, in the Prologue of Ariadne auf Naxos. Photo by Cory Weaver

Of course, it helps that it’s also superbly staged and beautifully designed… and that Rader-Shieber’s cast is so fully, bravely committed to realizing his vision. The acting in this Ariadne is acting; not “opera-acting.”

Musical values are equally strong. You won’t believe the level of orchestral playing this student orchestra delivers. Conductor George Manahan gives a propulsive, urgent reading of the score – occasionally his fast tempos press the singers, but the result is worth it, especially in Ariadne’s monologues, which here feel like rapturous outpourings, rather than the elegies they often become. 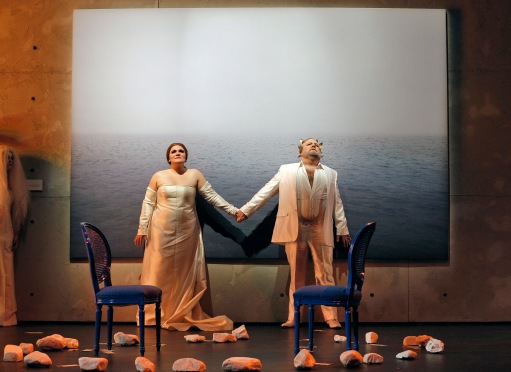 The cast more than meet the vocal demands, which really is saying something. If I single out Heather Stebbins (a luminous Ariadne, both at full volume and pianissimo), Ashley Milanese (who has the combination of virtuosity and beguiling tone Zerbinetta needs), and Lauren Eberwein (a passionate Komponist, always on the words) it’s because they are the major scene-stealers. But really, everybody’s terrific. (There’s also a delightful cameo from baritone Dennis Chmelensky, who has a speaking role here, and charms us with his cheeky acting. If any composer is looking to write an opera about SNL’s Stefon, Chmelensky is your guy!)

Finally, it’s a joy to hear Ariadne in the intimate Perelman Theater. The small size also means fewer available tickets, of course. Remaining performances are listed as sold-out, and I’m sure word on the street will increase demand. But there were a few empty seats at the opening – fear of the coming snow, no doubt – and our endless winter may have an upside if you’re looking to score a ticket returned to the box office.

Make the effort – trust me, it’s worth it.