After two days in London, we spent the next three in Paris, where highlights included back-to-back performances at the Théâtre des Champs-Elysées – Mozart’s La Clemenza di Tito on Sunday evening, and Handel’s Messiah on Monday (I’ll cover the later in another post).

I have a special attachment to this theatre – in 2000, on my first trip to Paris, we saw Cosí Fan Tutte, conducted by René Jacobs; musically at least (the production was a mixed bag) is among the greatest Mozart performances I’ve heard live. To my taste, the theatre itself is also one of the most beautiful I know, especially the façade and lobby, which are Art Nouveau at its most elegantly understated – to look at them, you can really see that Art Deco is less than a decade away (the Théâtre des Champs-Elysées was built in 1913 – not long after it opened, it was the site of the legendary riot over the premiere of Le Sacre du Printemps). It’s a privilege simply to be there.  Not an entirely comfortable one, though – leg room is virtually non-existent. (Waiting for the show to start, I found myself wondering if before 1915, there were no French people taller than 5’.) 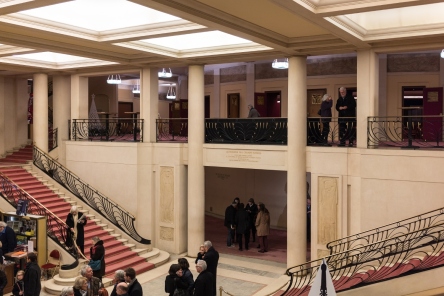 If this Clemenza didn’t quite equal that Cosí, it was still a fine, and sometimes splendid, performance. Well, musically, that is. The production, staged by Denis Podalydès of the Comédie-Française, seemed to please most of the audience more than it did me. A basically inchoate initial concept, involving an elegant actress (Leslie Menu) speaking some lines from Racine’s Bérénice, mercifully disappeared after a few minutes (though Menu appeared as a kind of iconic vision at several other points).

Once that was done, we settled into… not Rome c. 79 AD, but what looked like the lobby of Brown’s Hotel, c. 1935. The unit set is attractive enough – I’d be happy to have a room there – but fails to resonate with important aspects of the libretto. Podalydès throws in any number of clichés from Contemporary Opera Directing 101, including a distractingly large ensemble of silent bystanders and a stage jammed full of furniture – chairs, mostly, which were knocked down, only to reappear later, uprighted and reupholstered, in what I assume was meant to indicate Tito’s benevolence. Much of the major action is only partially visible in what looks like a large dining room located at the back of the stage.

Ultimately, Podalydès concept doesn’t entirely defeat the storytelling – he’s fortunate that his cast give detailed, engaged performances. But it’s often merely silly (the ravishing Annio/Servilia duet is upstaged by the arrival of a luggage cart), and never suggests the grandeur of the work (a small hotel restaurant fire isn’t on a comparable scale with the burning of Rome).

What largely rescued this Clemenza was its strong musical values, beginning with the conducting by Jérémie Rohrer, and the playing of his Le Cercle de L’Harmonie ensemble. Rohrer’s take on the piece was full of light and shade, with a subtle palette of colors and dynamics that were sometimes revelatory – especially in the recititatives, which Clemenza has in large quantities. This was not the grandest Clemenza I’ve ever heard, and sometimes I wished for a larger sense of scale – but it was perhaps the loveliest and most thoughtful.

The very appreciative audience saved their biggest ovation of Kate Lindsey (Sesto), but to my mind the star performance of the evening was Karina Gauvin as Vitellia. She has a bold, larger-than-life theatrical personality (at times, almost too much so – a couple of Margaret Hamilton, Wicked With of the West-like cackles bordered on camp), and an exceptionally beautiful, silvery lyric soprano that is deployed with style and musicality. The words are clear and finely-etched.   The exceptional range of the role pushes Gauvin a bit – ideally, there would be more oomph at both the extreme top and bottom. Apart from that, she was superb.

Lyndsey’s Sesto was basically well-sung, with a pretty, appealingly caramel-colored tone – but it was on the small side, and the coloratura stretched her to the limit (“Deh per questo” worked better than “Parto, parto”). I’d say she’s more naturally an Annio than a Sesto, and I suspect that the French audience’s enthusiasm is based at least in part on her exceptional slimness and Audrey Hepburn-like gamine persona.

Kurt Streit (Tito) was masterfully stylish, handled the long recits with dramatic and musical intelligence, and he’s a compelling stage presence. He’s also a fine technician, which got him through a role that no longer sounds completely comfortable. When he’s able to sing softly and in the middle-register, all is well. When things get high and loud – as they do in Clemenza – he’s audibly stretched. The rest of the cast – Julie Boulianne (Annio), Julie Fuchs (Servilia), Robert Gleadow (Publio) – were up to the job without offering anything particularly individual or special.

So as I said… not quite the equal of Jacobs’ Cosi more than a decade ago… but a fine performance – and, in Gauvin and Rhorer, a memorable one. 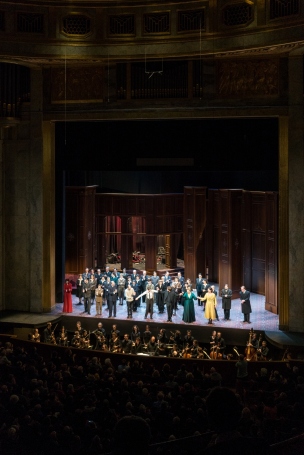