REVIEW: Frankie and Johnny in the Clair de Lune is a Star-Crossed Mistake 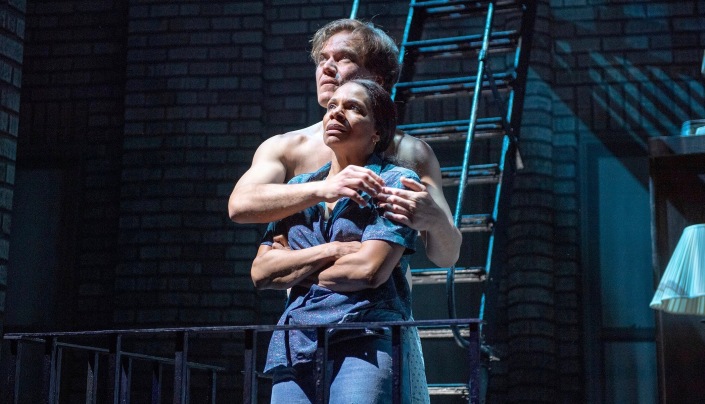 Audra McDonald and Michael Shannon in Frankie and Johnny in the Clair de Lune. (Photo by Deen van Meer)

CK: Have you ever been on a date that just wouldn’t end? The kind where you know it’s not clicking and you bide your time, all the while thinking about everything going wrong? That’s how I felt at the Broadway revival of Frankie and Johnny in the Clair de Lune, a Terrence McNally play from 1987 that shows its age, and its hand, far too often.

DF: My first reaction was to be reminded of how little I like McNally’s writing—it’s at once jokey, cranked up, and maudlin. The shifts between the two styles, delivered with a “now we’re bringing down the room” smugness, are especially gauche. Really, how many McNally plays can withstand the light of day? Not many, I think.

CK: Subtlety has never been McNally’s métier, but it struck me how much of the script sounds like second-rate sitcom writing. (Frankie: Here’s your sandwich. Johnny: Here’s my guts!) Either that, or it’s so undeniably arch that you can’t help but wonder whether anyone actually talks that way—which is probably not the question you should be asking at what’s essentially a realistic play. Early on, Frankie says to Johnny that she’s “a BLT down sort of person…and I think you’re looking for someone a little more pheasant under glass.” Has anyone ever actually said something like that? I grew up in the restaurant business and I don’t think I’ve ever heard the term “BLT down” used anywhere except in this play, several times (and in Mack and Mabel).

DF: Ick. It’s such a slick piece—designed to sound deep, but also clearly a project that was meant to have lots of commercial potential. I’m not sure any production could really salvage it, but certainly not this one, which gives away the basic problem almost immediately: in the coy way the nudity is handled, full of flattering shadows and angles. Not only are both actors (Audra McDonald as Frankie, Michael Shannon as Johnny) in fine physical shape, but McDonald in particular looks like a gorgeous piece of sculpture in Natasha Katz’s unbelievably flattering half-light.

CK: The opening sex scene is all wrong, for sure, but the problems really begin before that. Director Arin Arbus has McDonald and Shannon enter, in full light and wearing street clothes, before the play even begins. This allows the audience to acknowledge their celebrity status with entrance applause. But it totally kills the mood the play should create from the first image onward. These are regular, unremarkable people, looking for a moment of comfort with each other as a salve for their disappointing lives. Starting the show with its stars essentially giving a wink to the crowd totally zapped my ability to lose myself in their story: I couldn’t see Frankie and Johnny—I could only see Audra McDonald and Michael Shannon as Frankie and Johnny.

DF: And Frankie and Johnny is, above all, a play about the awkwardness of intimacy.

CK: Not just the awkwardness of intimacy, but the hunger that accompanies it. McNally wrote this play at the height of the HIV/AIDS epidemic, and the specter of that plague hangs heavily over the drama’s blunt sexuality. Frankie lays it pretty bare: “I don’t know about you but I get so sick and tired of living this way, that we’re gonna die from one another, that every so often I just want to act like Saturday night really is a Saturday night, the way it used to be.”

DF: Ick again. You know, it occurs to me that we have an oddly parallel situation this Broadway season: two plays from 1987 (the other is Burn This, which you covered for Exeunt NYC and I wrote about here), both by gay playwrights and ostensibly about straight couples—but which, of course, were clearly seen in their time as allegories of the epidemic. I think neither play is particularly strong in any historical context, but the passing of thirty-plus years has really lost the resonance. And it doesn’t help that neither gets a good production in their current revivals.

CK: McNally further allegorized in Lips Together, Teeth Apart, another play that considers gay loss through a straight lens. I understand the impetus, especially at that time, to create parallels that would be palatable (for lack of a better word) to a largely heterosexual audience—even as writers like Larry Kramer, Harvey Fierstein, and Christopher Durang were considering AIDS on their own, unabashedly queer terms. But both Burn This and Lips Together at least have the shadow of a gay character hanging over the play, whereas Frankie and Johnny is unapologetically a mainstream boy-meets-girl romance that even features a few homophobic wisecracks. As time separates it from the context in which it was created, I think it ends up feeling even hollower than Burn This—now, it’s essentially just a romantic comedy, and a trying one at that.

DF: The casting of stars—any stars, really—is antithetical to the very ordinariness we need in Frankie and Johnny. I actually think there are plays that work better in local theater productions for that very reason, and this is one of them. McDonald at this point is a theater legend—her Tony-ed career is impossible to ignore. No matter how hard she tries—and oh my god, does she try hard here!—it’s like watching the Statue of Liberty playing a waitress.

CK: McDonald definitely doesn’t come across as a working-class woman who’s danced with disillusionment and made peace with the sad state of her life. (By contrast, Edie Falco, in the prior Broadway revival, was totally at home in this blue-collar idiom.) And both performances remain frustratingly frenetic throughout. Each bravura monologue or free association moves them farther apart when it should bring them closer together. And Riccardo Hernández’s expansive, impressionistic set—which looks like no cramped studio apartment I’ve ever seen—only gives them more room to glide away from each other.

DF: I see a conscious decision by Arbus and company to play Frankie and Johnny mostly for speed and charm. It’s especially noticeable in Shannon’s performance, which—though I wouldn’t say either quality is in his usual comfort zone—he largely delivers. But there’s a real cost here in the minimizing the emotional core of the play…at least, till near the end. And frankly, what McDonald does in the final scene—while a tour-de-force on its own—isn’t what I think the play calls for.  Arbus is a very odd choice for what, as you said earlier, is “essentially a realistic play.” She can be an interesting director, but in my experience mostly one with a “downtown,” often abstracted, symbolist style. That’s a misfit here, and we’re constantly reminded of it in that overblown set, which distills the play’s imagery into a collection of working-class clichés: a toilet tank, a fire escape, etc. We’d be so much better off in a straightforward representational world.

CK: Speed seems to work against what the play wants to achieve—chiefly, a sense of these characters loosening up and getting to know each other. Charm should be evident, but it’s in short supply, both in the writing and the acting here. And I have to wonder: Can we discuss this play in 2019 without addressing its sexual politics? More than in any other production I’ve seen, I was struck by how uncomfortable Johnny’s overeagerness, and his unwillingness to take Frankie’s rejections at face value, made me.

DF: Indeed. On that score, the play is now doubly injured: it’s lost the sense of allegory for the gay community, and now is awkwardly coming back into the spotlight at a time when we’re very consciously thinking about #MeToo. In that context, there’s a real “no-means-no” problem.

CK: As critics, we should always be asking a simple question: Why this play, at this time? Here, I can’t settle on a satisfying answer. We often find ourselves talking about things that should have stayed in their cultural moment. I’m ready to add Frankie and Johnny in the Clair de Lune to that list. Maybe in 1987 it seemed like a strong romantic overture, the start of something beautiful and lasting. In the cold, hard light of 2019, it’s a one-night-stand best left unremembered.

Frankie and Johnny in the Clair de Lune runs through August 25th. For more information, visit the website.