REVIEW: All My Sons on Broadway: A Critical Dialogue 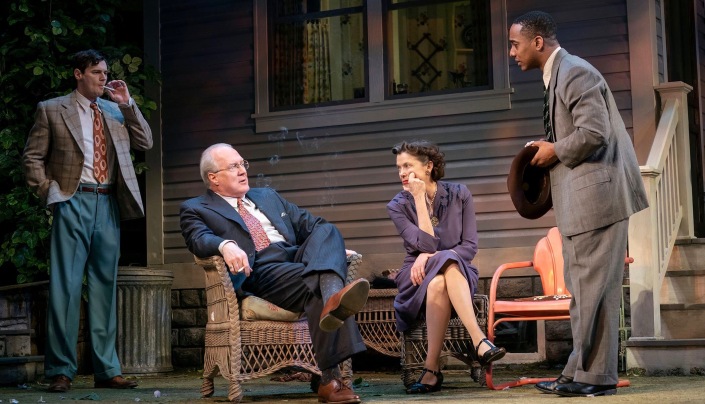 For better or worse, you will find no formal experimentalism in Arthur Miller’s All My Sons, now on Broadway in a revival by director Jack O’Brien. But here at Reclining Standards, we are trying an experiment—our first dual review! Joining David Fox is Cameron Kelsall, a critic whose work appears in the Philadelphia Inquirer, Broad Street Review, Opera News, Exeunt NYC, Parterre, Bachtrack, and others. Cameron and David frequently attend performances together, so tandem reviewing is a logical extension. We hope this will be the first of many to come.

DF: As so often, Cameron, you and I sat together for the Roundabout’s All My Sons—and, I think, largely agreed about it?

CK: Indeed. And I think we also share general feelings on the play itself—chiefly, that it’s over-obvious and sanctimonious. I certainly felt the overly straightforward nature of this production did the play no favors. More than ever, it seemed like a parable that’s been plotted within an inch of its life.

DF: Yup, that’s Arthur Miller, the American theater’s pre-eminent finger-wagger. For me, the best news about this current All My Sons is that, at long last, critics seem willing to question Miller’s once-uncontested brilliance. “With all its seams showing,” says Jesse Green in The New York Times. “…the road… is long, painfully dated, and—though we don’t like to admit to basic failings in our canonized playwrights—marked by some truly frustrating logical potholes,” writes Sara Holdren on Vulture. To be sure, other critics bought the Miller hokum hook, line, and sinker. But not all. Glory be!—have we finally seen the light?

CK: When you look at the reviews in aggregate, there are more positive than negative takes about this production. But The New York Times, of course, has disproportionate influence—and, at least to me, this is one of the strongest reviews by Jesse Green since he became their co-chief theater critic. I know that you and I have had many conversations about our skepticism of Miller’s exalted place in the dramatic canon. For one thing, when you look at his body of work, there are more duds than most people want to admit, but I would honestly rank this play near the bottom of any appraisal of his output.

DF: It’s odd, because I find the basic ideas far more complex and interesting than those in Death of a Salesman. But All My Sons—which, admittedly, is very near the beginning of Miller’s career—is just so turgid.

CK: It’s ten pounds of melodrama in a five-pound bag. As I think I said in conversation the other day, to me, so much of Miller breaks down to the destruction of decent, hard-working white men by society—and you certainly have that here. But you also have the father-son struggle that will come into play again in Salesman, as well as the overall family tension that permeates the play.

DF: I wonder about the “decent” part. I think it’s clear that Joe (Keller, the play’s protagonist/antagonist) believes himself to be decent—that he’s doing the only thing possible given the variables of American success and survival. (For the uninitiated, Keller’s company accidentally manufactured faulty airplane parts during World War II, which they knowingly allowed to be used. The error caused the death of twenty-one pilots.) But I sense that Miller also wants us to see Joe as morally flawed. Honestly, I can’t put it together—just one of many questions I have about All My Sons.

CK: It feels strange to call out spoilers in a 72-year-old play, but if you’ve never seen All My Sons before and you want to be surprised, now is the time to jump ahead a few paragraphs. For those still with us, I think you can extrapolate a certain amount of guilt from Joe’s suicide at the end. If he truly felt himself to be beyond reproach, would he have done that? At the same time, Miller’s spends a considerable amount of the play burnishing Joe’s image, even in the eyes of his son Chris, who ultimately sets the denouement in motion by turning on him in the final scene.

DF: Speaking of suicides and spoilers, each time I see All My Sons, I’m newly repulsed by the story of other son Larry’s suicide. It’s not enough that he kills himself in a private act of contrition? He has to take down a plane and potentially threaten other lives to make his point?

CK: The concept of atonement in an Arthur Miller play requires a grand, sweeping gesture.

DF: And I realize we haven’t even gotten to Kate, the play’s fulcrum. I’m puzzled by her, too.

CK: She really is a confounding character. Moral center? Holy fool? Blithe accomplice? Perhaps more than anyone else in the piece, she seems layered with interesting ambiguity. But much of that didn’t come across to me in Annette Bening’s performance.

Tracy Letts and Annette Bening in All My Sons. (Photo by Joan Marcus)

DF: Agreed about Bening. She’s clearly a fine stage actor, but here she seems so deliberately drabbed down that it’s almost showy. Neither she nor Tracy Letts—also a terrific actor—ever convinced me they were a married couple with a secret, connected history.

CK: And saying all this, I also realize that we haven’t talked much about the production that we’re ostensibly reviewing.

DF: The whole style of the show, which has sets by Douglas W. Schmidt and costumes by Jane Greenwood, is so technicolor bucolic that it looked like an MGM musical. Throughout the first scene, I kept waiting for Judy Garland to pull up on her Summer Stock tractor and sing, “Howdy, Neighbor!”

CK: The show curtain is literally a postage stamp.

DF: Speaking of show curtains, the opening coup-de-théâtre—the filmed evocation of planes crashing—feels completely misguided to me. This is meant to be implied and imagined, not explicit. It isn’t even clear what we’re watching—is it what actually happened? Is it Kate’s nightmare-ish vision? I think the latter, but I was confused. Meanwhile, this is what I’m wondering about—rather than actually watching the show.

CK: It also clashes with the production’s ethos, which is painstakingly literal-minded.

DF: I’ve seen the production praised as “traditional,” but this goes way beyond that—or more to the point, falls beneath it. Jack O’Brien’s work suggests that the last sixty-plus years of thinking about theater direction simply never happened. He’s moved people around in pictorial groups; he’s followed Miller’s stage directions; he’s made sure that every point, however overstated already in the text, is also underscored in the actor’s motivational playbook. But given Miller’s general blatancy, that kind of non-interpretation is the last thing All My Sons needs.

CK: We’ve both seen other productions of this play, including the recent—and to my mind, excellent—Philadelphia version by Curio Theatre Company. I also saw the most recent prior Broadway revival, which was directed by Simon McBurney, co-founder of the British avant-garde company Théâtre de Complicité. I remember that production as maddening, misguided, confounding, and ultimately unsuccessful—but never boring. There were lots of ideas that didn’t make sense, like John Lithgow (playing Joe Keller) addressing the audience prior to the first scene, and stating that we were about to watch a company of actors perform Arthur Miller’s play All My Sons. This threw realism out the window before the show even began. I also recall Dianne Wiest (as Kate Keller) wandering around the set during scene changes in a fugue state, draped in a fighter pilot’s bomber jacket. Arguably, these ideas are as blunt as Miller’s own moralizing, but it showed that McBurney had thoughts about the text and how he wanted the audience to engage with it. We never get that from O’Brien here.

DF: Exactly. There’s scarcely an idea to be found here. In the first ten minutes of Act III, I felt that, finally, this All My Sons might be onto something. The bickering between Kate and Joe had the snarky bite of reality (it’s Letts’ and Bening’s best scene by far), but it was also glaringly apparent that they were clueless as to the enormity of what they’d done—they’d repressed it completely. Honestly, I’m not sure whether this was intentional or the ironic byproduct of O’Brien’s general tepidness, but it worked—and, for me, added a new dimension to the play. Then it quickly faded away, and in truth, that interpretation is at odds Miller’s melodramatic style, full of revelations meant to shake the audience to its very core. (Arthur Miller is America’s bargain-basement Ibsen).

CK: There are a few people making interesting choices in this production. Hampton Fluker (as George, the son of Joe Keller’s imprisoned business partner) approaches his role with passionate, righteous indignation. When he arrives at the top of the second act, he momentarily wakes up the show. And Chinasa Ogbuagu achieves a similar sense of seeing through the Kellers’ fatuousness as Sue Bayliss, the wife of the town doctor.

DF: Fluker and Ogbuago were the major takeaway performances for me, too. The character of Sue Bayliss stuck with me here in a way she hasn’t before—her husband imagines himself as a great humanitarian, but it’s actually she who supported them while he was in medical school. His altruism is built on her labor.

CK: I’ve never considered Miller a great thinker about gender and equity, but it’s interesting that in 1947, he made the observation that a woman had to be the backbone of the family in order to legitimize her husband’s flight of fancy. Maybe the play I really want to see is about Sue Bayliss?

DF: She reads to me as quite a bit stronger than Salesman’s Linda Loman, whose entire identity is in relation to her husband.

CK: Not to mention the conception of women as crippling succubi in After the Fall, which has always struck me as one of the most blatantly misogynist plays ever written.

DF: Which, not coincidentally, got a really terrible Broadway production in 2004—one that we both saw (though not together). But that’s a story for another day. Shall we wrap up All My Sons, Cameron? Your final observation?

CK: It’s crude to say that a production of this play crashes and burns, but I guess I just said it. And in this case, it’s true.

DF: Also true: All My Sons is playing at the American Airlines Theatre. Let that sink in.

CK: I guess we should be grateful that Boeing didn’t get the naming rights.

All My Sons plays through June 23. For more information, visit the Roundabout Theatre website.