REVIEW: Sorkin & Sher’s To Kill a Mockingbird Gets the Epcot Treatment 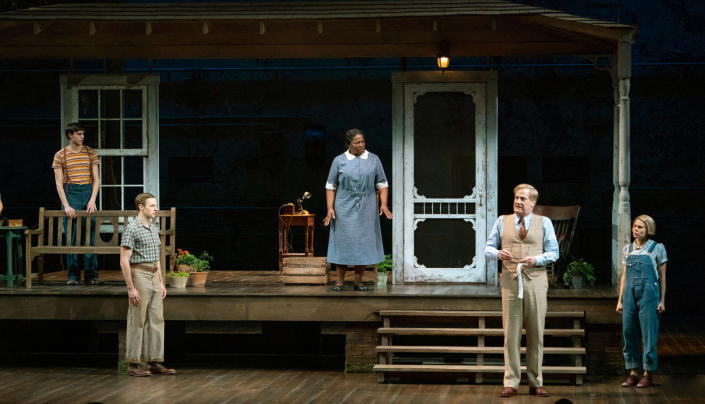 To Kill a Mockingbird, at Broadway’s Shubert Theatre

I finally saw To Kill a Mockingbird just as the show was beginning its sixth month at the Shubert Theatre. Only days before, it had broken a Broadway record, taking in $1.718M in a week. These chart-busting sales—and corresponding capacity audiences—have been a regular occurrence since this adaptation of Harper Lee’s adored 1960 novel was in previews.

The performance I saw had not an empty seat in sight, and the often-noisy enthusiasm of the crowd was palpable, from the applause that greeted the initial dimming of the house lights to the surging standing ovation at the end.

In Mockingbird, Broadway has a bona fide mega-hit of a kind that’s rare enough for musicals and all-but-unheard-of for straight plays.

This is, of course, thrilling for the show’s producers—also for the creative team that delivers Mockingbird every night, all of whom seem to have secure employment for years to come.

For me, the news isn’t quite so joyful. A Broadway show is one thing; a near-permanent installation quite another. I love the theater in part because it’s transitory—quite different, for example, from going to Disneyland. Or at least, it should be.

Yet that theme park metaphor occurred to me again and again watching Mockingbird, which more than anything feels like a triumph of theatrical engineering, designed to last a lifetime and beyond. To guarantee this show goes the distance, Lee’s beloved and very human story is cranked up and organized like a series of dioramas at Epcot. The presentation could hardly be more skillful…or (for me, at least) more disheartening.

Playwright Aaron Sorkin is in full command of his storytelling skills from the start, as narrative duties are shared among the three young protagonists: Scout (Celia Keenan-Bolger), her brother Jem (Will Pullen), and their oddball pal, Dill (Gideon Glick). It’s seamless and entertaining, though the fact that these characters, meant to be children, are played by clearly adult professionals underscores the performative artifice.

Sorkin also beefs up the courtroom scenes, which certainly play into his longtime theme of an underdog nobly fighting against seemingly insurmountable obstacles.

Next up, director Bartlett Sher has created a lavishly cinematic production (sets by Miriam Buether, lighting by Jennifer Tipton) that also works with the precision of a Rolex. There are a lot of moving parts for sure—the program lists a cast of 27, and many of them are pressed into service changing the scenery, as we go from living room to porch to courtroom to prison, and much more. It’s all delivered with drill-team perfection, but more than once I thought I was watching a show about lifting furniture.

The actors have more than that to do, of course. Jeff Daniels is an Atticus Finch straight out of Central Casting. His performance deepens in the second act, but initially he might as well wear a sign around his neck: “Quiet Southern Lawyer Who Packs a Wallop.”

Daniels, like a number of others in the cast, seems to be playing an archetype rather than a person. The most dispiriting example is Frederick Weller as Bob Ewell. Saddled with Mockingbird’s most villainous character —an unrepentant racist and serial child abuser—I still expected Weller, an actor of extraordinary empathic gifts, to find some nuances. Not so. With an accent straight out of Green Acres, Weller’s characterization is strictly shorthand.

The others largely dispatch their duties with admirable professionalism but, for me at least, without much dimensionality. Most satisfying by far is Gbenga Akkinnagbe as Tom Robinson—this actor’s heartbreaking simplicity hits the most vulnerable and personal note of the evening.

I say all this knowing full well my view of this Mockingbird is decidedly in the minority. Many of my friends and theater colleagues have adored it, and critical hosannas abound. One quote among many similar: “To Kill a Mockingbird is as timely as it is timeless,” writes Peter Travers in Rolling Stone.

Indeed, Travers is one of a number of critics who suggest that Mockingbird arrives at exactly the moment we need it most—implying without specifically articulating that Trumpian attitudes make this corrective all the more necessary.

I sure as hell hope that isn’t true. Can it really be the case that we need a lavish Broadway show to tell us that lynching an innocent man because he’s black is a bad thing? If so, we’re in even more dire straits than I imagine.

A rather less frightening—and, I think, more pertinent—lesson can be drawn here, though, in the cautionary tale for aspiring theater artists: sleek production values may help a show find commercial success, but they don’t always serve the core values of the source material.