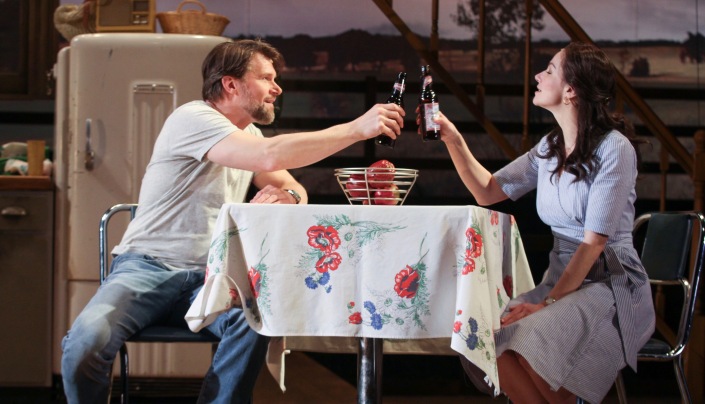 Gregg Goodbrod and Sarah Gliko in The Bridges of Madison County at Philadelphia Theatre Company. (Photo by Paola Nogueras)

It began as a book, if that’s the right word for 200 nearly unreadable pieces of paper bound together only by glue and pretension. Robert James Waller’s 1992 novel The Bridges of Madison County was a runaway bestseller for no reason I can explain.

The plot traffics in clichés: an Italian born woman (Francesca), whose fiancé died in World War II, married a decent but dull American soldier. He brings her to his farm in Iowa, where she raises two American children and starts reading seed catalogs. This was (spoiler alert!) not the life she dreamed of, and when a handsome photographer (Robert) comes to shoot a photo essay on (wait for it) the covered bridges of Madison County, she (another spoiler alert!) falls for him in a big way.

Do I need to say that their romance is torrid and furtive? I didn’t think so. Instead, I’ll tell you (if you haven’t figured it out yet) that Bridges is a terrible novel. It, far more than Kerouac’s elliptical On the Road, which Waller’s work resembles only in gesturing at America-with-a-capital-A, deserves the immortal quip attributed to Truman Capote or Gore Vidal (they both take the credit): “It’s not writing—it’s typing.”

Yet somehow, it found its audience. The idea that water finds its own level seems particularly apt.

More astonishingly, against all odds, Clint Eastwood directed and starred in a surprisingly good movie version, which also features Meryl Streep at her very best. The adaptation is relatively low-key, cutting through Waller’s treacly excess, and locating something quiet and sad underneath it.

Both stars give performances of effortless understatement, and something authentic shines through. It is really due to Eastwood that, for better or worse, Bridges remained on the horizon, rather than in the dustbin of potboilers that long ago decayed into nothing.

Fast-forward nearly two decades, when composer and lyricist Jason Robert Brown and playwright Marsha Norman wrote a musical adaptation that stuffs the bunk back in. There’s far too much clumsy exposition, and the songs underscore every obvious, hackneyed moment in the script. A few numbers are appealing enough on their own, but the entire piece lacks variety and depth.

The version performed by Philadelphia Theatre Company uses a more recent chamber-sized arrangement of the show. In theory, that’s a good idea—Bridges at its core is an intimate story. But it’s so overamplified here that we lose the sense of scale.

Sadly, it’s not the only misstep in director Mark Martino’s slick, superficial mounting. Francesca (sympathetically played by Sarah Gliko in the evening’s most fully realized performance) and Robert (Gregg Goodbrod) sing of their urgent and passionate connection, but there’s little sense of chemistry between them.

The nuances of the relationship, and the awkwardness of their growing attraction while Francesca’s husband and children are in close proximity, hardly register. Later in Act II, when they consummate their affair, Brown’s score attempts a rise to near-operatic grandeur, which is not a comfortable vocal fit for either Gliko or Goodbrod.

In the end, what fatally undoes Bridges is its own grandiosity. Brown, Norman, and company are so busy beating us over the head with Francesca and Robert’s turgid Romance-with-a-capital-R that the small emotional underpinnings, and any sense of authentic inner life, disappear entirely.