REVIEW: At the Wilma Theater, Romeo and Juliet Turns Hipster

Romeo and Juliet at the Wilma Theater. (Photo by Johanna Austin)

In Blanka Zizka’s high-concept production of Shakespeare’s perennial favorite, Romeo (Matteo Scammell) enters and immediately collapses. I know just how he feels—there’s nothing more exhausting than middle-aged people trying to be hip.

No, wait—that’s harsh. Let me start again. Blanka Zizka’s production of Romeo and Juliet has a high-energy, imaginative theatricality that shows off her physically dexterous HotHouse Ensemble to advantage. There are some intriguing ideas here, and—as so often at the Wilma—a highly sophisticated, striking mise en scène. (Scenic designer Matt Saunders has created a series of shimmer curtains that simultaneously delineate individual places and moods and evoke an elusive ghost-world.)

Well, that’s all true too, as far as it goes. But the problem here is visible from the start. In interviews about this production, Zizka has made a specific point of this oft-told tale’s youth and contemporary relevance. Fair enough. But the resulting production consistently looks like it’s trying too hard. Frankly, the Wilma’s Romeo and Juliet doesn’t suggest youth so much as an experienced director’s attempt to convey it. The essence of true hipness is its effortlessness; here, the seams are definitely showing.

Still, Zizka is always thought-provoking, and there are some significant points of interest here. A few performances—notably Lindsay Smiling as a dope-smoking, thickly accented Friar Lawrence and Anthony Martinez-Briggs as a rapping Mercutio—are completely successful on their own terms. A number of others have their fine moments; the visual staging does, too. (My, they do love climbing the walls at the Wilma.)

Other actors—including the central pair—are less consistent. The general quest for edginess finds the cast adopting a glib, sardonic tone in their line readings. Taysha Canales, a lively, big-personality Juliet, rushes through her dialogue; Scammell, a swaggering Romeo, often gives his a “too-cool-for-school” spin. Together, they score some surprising and refreshing comic points in Shakespeare’s iconic balcony scene. 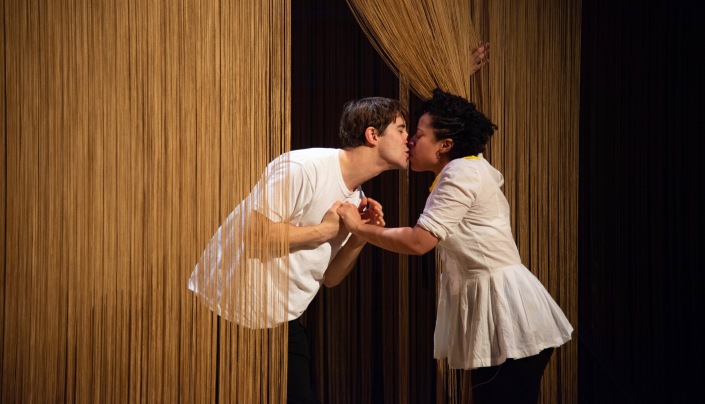 Matteo Scammell and Taysha Canales in Romeo and Juliet at the Wilma Theater. (Photo by Johanna Austin)

But there is virtually no lyricism here, nor much sense of spiritual radiance. These quirky performances and others fare less well when the action becomes bigger and darker. Krista Apple’s Nurse embodies the limitations. Scene to scene she seems two almost entirely different characters—one broadly comic, the other grandly tragic—that have little to do with each other. The inserted musical interludes composed and performed by Gracie Martin—enjoyable and theatrical in themselves—interrupt the crucial sense of plot momentum. Throughout, I wondered whether an audience member unfamiliar with the rather complex narrative arc of Romeo and Juliet could decipher the true themes and meaning of the play.

The Wilma will have a chance to find out. As the audience was told opening night, during the run, they will host thousands of local students, which of course is a wonderful thing. Clearly, Zizka wishes to welcome them with open arms and a not-your-grandfather’s-Shakespeare interpretation.

How will they respond? Time will tell. To me, the obvious efforts at youth and relevance (including a misguided final diversion into school violence and bigger social issues) is all too visibly an applied construct rather than a natural fit. Apart from a few members of the ensemble, this cast looks no more like teenagers than any other Romeo and Juliet. I’m not sure that the wildly enthusiastic opening night crowd is a good predictor of how young people will receive this production.

The earnestness imagination of Zizka’s vision is never in question. But in the theater, just as in the rest of life, it is possible to try too hard.