REVIEW: The Eccentricities of a Nightingale is a Brilliant Cabinet of Curiosities

Tina Brock and John Zak in Eccentricities of a Nightingale at Philadelphia Fringe 2018. (Photo by Johanna AustinArt)

The moment Tina Brock arrives on stage in The Eccentricities of a Nightingale, the world—to quote another play by Tennessee Williams—is lit by lightning. Brock plays Miss Alma Winemiller, one of Williams’ most elliptical heroines. It’s arguably not an ideal marriage of actress and character (more on that later). But Brock, blonded and marcelled with a doll-like prettiness that is simultaneously exquisite and hard-edged, does something even bolder. She channels the essence of Williams’ women on a grander scale. The effect is disquieting and thrilling.

Seen here, she isn’t just Miss Alma. She’s Blanche DuBois, Alexandra Del Lago, Amanda Wingfield. Brock profoundly understands these Southern women—their pride and vulnerability, their humor, desperation, and anger. And she knows how to bring it to the stage in a brilliant performance, vibrating with energy and richly nuanced.

Will Miss Alma win the heart of Dr. John Buchanan (touchingly acted here by the endearing John Zak), whom she pursues through the play with such singular, elemental drive? You’ll need to see The Eccentricities of a Nightingale to find out. (And you must, if you have any interest in good theater and fine acting.) But I will tell you this: Tina Brock has the audience eating out of the palm of her hand from the get-go.

Eccentricities, Williams’ long-aborning reworking of his better-known Summer and Smoke, is itself a bit of a curiosity. The basic story (in brief: an oddball singing teacher, daughter of a small-town minister, sets her sights on the local doctor) remains the same, but the two titles are a pretty good summary of the shift in tone. The earlier play emphasizes sultry melodrama, with complicated, triangulated sexual dalliances on the front burner. Eccentricities is quirkier—shorter, leaner, and (especially as seen here) more bizarrely humorous.

Another good summary of the shift between the two plays is a change in metaphors. Summer has an off-stage but much-discussed casino, where characters can go to unleash their baser natures. Eccentricities does away with the casino, offering instead an unseen Musée Mécanique, a mysterious collection of odds and ends that really defies any sense of logic. Alma’s mother, played here by the fabulous Jane Moore, almost stopped the show on opening night with her sensational monologue about it. 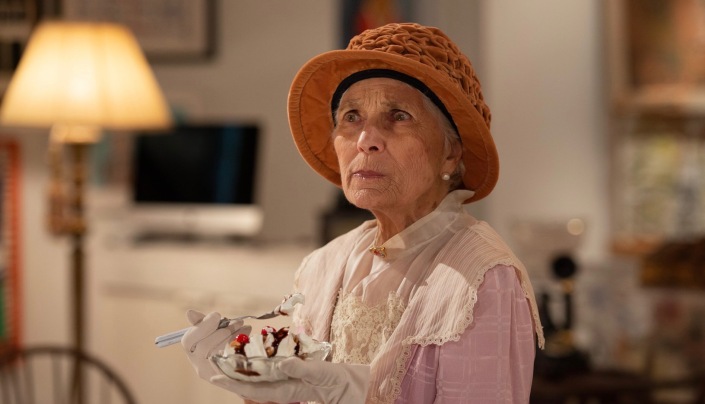 Jane Moore in Eccentricities of a Nightingale at Philadelphia Fringe 2018. (Photo by Johanna AustinArt)

At the Bethany Mission Gallery, which itself is a collection of droll and delightful Americana, Eccentricities is truly a cabinet of curiosities. One in particular changes the focus here, and although I’d like to be gallant, it needs to be mentioned. Alma and John are generally played by actors in their 30s or early 40s. Brock and Zak are considerably older than that.

For me, although it alters the underlying dynamic of their relationship, the aging-up actually sharpens the play. Love as seen here is physical, certainly; but it’s also a cushion against loneliness and the sheer brute force of life. That has rarely registered so poignantly.

Another major theme also comes through loud and clear. Williams, with supreme irony, called his fictional Mississippi town “Glorious Hill,” but it’s closer to a hive or a snake pit. Small-minded pettiness lurks around every corner.

Idiopathic Ridiculopathy Consortium has long made a specialty of absurdist theater; Eccentricities is not in that category, but Brock—who also directs here, with real verve—has applied a strong dose of comic vigor to the lives of the town people, culminating in a hilarious at-home salon where the rigid, self-righteous townsfolk express outrage over the poetry of William Blake (“Insane! Insane! The man was a mad fanatic!”).  Whether Williams wanted something quite this heightened is debatable. Some will probably object that it’s too much. But I’d say it doesn’t matter. The gang at IRC makes it work.

In addition to the performances by Brock, Moore, and Zak—all of whom should jump to the top of next year’s Barrymore lists—there’s some fine supporting by the ensemble.

Eccentricities is, to be sure, an odd play. This is a delightful but idiosyncratic production. Trust me, though—when Tina Brock takes to the stage, brilliance is never far away.

Eccentricities of a Nightingale plays through September 23. For more information, visit the Philadelphia Fringe 2018 website.