Two years ago, I saw playwright Young Jean Lee’s intriguing, elliptical Straight White Men in an estimable production at Philadelphia’s InterAct Theatre. What I saw recently, in a production by Second Stage at Broadway’s Helen Hayes Theater, is and is not the same work.

Mostly, it is. The basic plot is unchanged. Three brothers have gathered at the rather drab suburban home where they grew up. Their mother died not long ago, and they have returned to celebrate Christmas with their elderly, widowed father. The group falls naturally into old patterns of lovingly teasing one another, though it’s clear that one brother in particular—Matt—approaches life very differently from his siblings. And even though they mean to be supportive, the undeniable sense that Matt is in a world apart destabilizes the others.

What’s different here is Lee’s framing device. In the version I saw in Philadelphia, the first person we saw seemed to be a stage manager or production assistant—a woman who gave the usual announcement about cell phones, candy wrappers, etc. But her speech went on and on, growing more prohibitive and controlling. Slowly it dawned on the audience that she was, in fact, a character, and the sole female actor in the show. She appeared several more times, presiding over scene shifts. The net effect was unsettling, putting the audience on notice that things weren’t necessarily what they appeared.

In Anna Shapiro’s Broadway production, the “on-stage manager” has disappeared, replaced by a different narrative framing device. Here, two gender non-binary performers, Kate Bornstein and Ty Defoe, appear in front of a sparkling mylar curtain, introduce themselves, and describe what we’re about to see. Both are delightful, charming presences. They express considerable concern for our collective well-being; they put us at ease.

Likely some of this is meant to be wryly satirical, Lee’s commentary on our overly squishy, let’s-share-and-grow-together culture. Still, the net effect is humorous and comforting—exactly the opposite of the disconcerting ambiguity I felt about the stage manager gambit.

A smaller but also significant difference is part of the design—a literal frame now put around the stage. In Philadelphia, the show was presented in a frontal configuration, though an actual proscenium arch was barely suggested. Broadway scenic designer Todd Rosenthal has gone the extra mile with an actual decorative frame that surrounds the stage, turning it into a kind of tableau vivant, or perhaps a diorama of the sort we’d see in a museum of natural history. There’s even an identifying plaque at the base of the frame that reads “Straight White Men.”

In short, both the narrative framing device and the literal frame surrounding the stage enforce an ironic sense of distance and make-believe, putting the audience in a receptive, even cheerful mood. 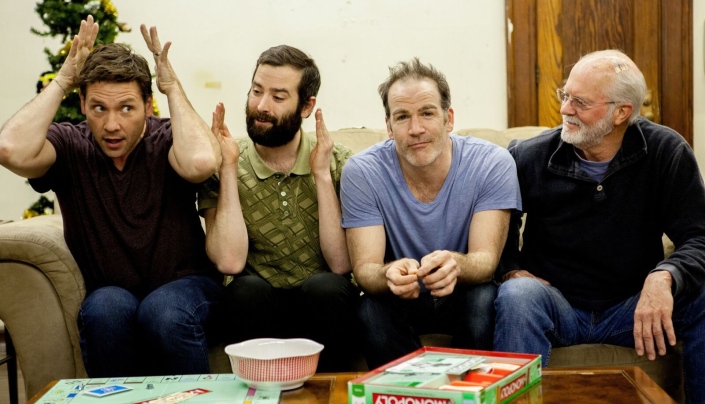 They also de-fang Lee’s play in a damaging way. The first time I saw Straight White Men, I left the theater wondering if I’d understood the play. Surely there’s a deep, disruptive level of irony underlying this seemingly straightforward character study of four adult males. Lee’s long-standing reputation as a theatrical avant-gardist made me even more certain that we were meant to view Straight White Men as ironic.

But exactly what that irony is feels out of reach. And I would argue that it’s that quality that is the best part of Single White Men. Alas, it’s largely lost here, as the audience views the play with a sense of arm’s length safety that the production itself instills.

Too bad, because much of what Shapiro and company do with Straight White Menis effective and skillful. Together, they really go for broke in terms of staging the aging frat boy antics (including some cringe-worthy break dancing), which they get hilariously, embarrassingly right.

Josh Charles has made a specialty of playing outrageously cocky male characters with a sense of charm—the more he’s an asshole, the cuter he gets. It’s the ideal quality for Jake, one of brothers, and Charles more or less runs away with the show.

Paul Schneider is, like Charles, a familiar presence from TV, where his soft-spoken presence and hooded, dark eyes can suggest with the most minimal means that there’s an emotional storm brewing; he’s terrific as Matt, the “troubled” brother.

Armie Hammer is, of course, the movie star in the group. Here, interestingly cast in the less showy role of Drew, the most sensitive of the brothers, Hammer physically towers over the rest of the cast, and his chiseled blonde movie star-ishness is impossible to ignore. He throws himself fully into the merriment, and he’s especially effective with the physical business. It’s not his fault that he’s so handsome as to be a distraction, but I’m afraid it’s the case.

Actor Stephen Payne (a dead-ringer for late-career Sam Shepard, by the way), who plays Ed, the father, was a late-addition to the cast. He’s got the right kind of stern but loving presence, but recedes into the background more than he should, feeling like an observer than the patriarch.

Ultimately, so much of the good work here is frustratingly undermined by Lee’s own rewrites, and by direction and design that softens the material. If Broadway’s Straight White Men isn’t the star-studded, feel-good comedy of the year, it still comes too close for comfort.