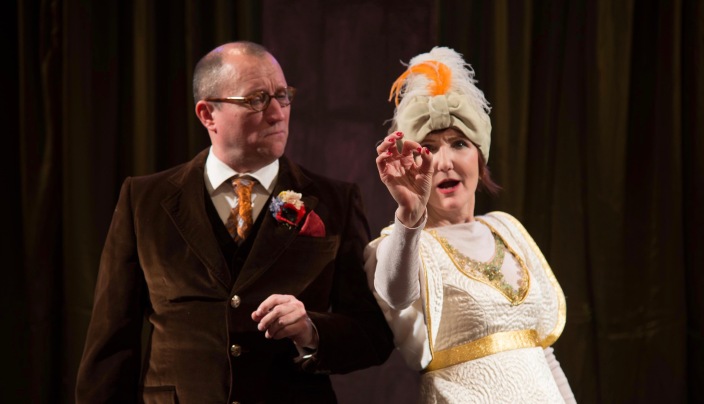 Style. I sometimes think it’s the rarest element in the theater, and the most precious.  Fortunately for Philadelphia, Idiopathic Ridiculopathy Consortium (IRC from here on, to spare my typing!) and its artistic director, Tina Brock, are masters of style—with a special affinity for absurdism, which they understand to be not one thing, but a spectrum.

Here, in Jean Anouilh’s Time Remembered, Jack Tamburri directs with verve, and Brock herself is acting—a delectable performance as the grandly eccentric Duchess of Pont-du-Bronc. But the mastery of style is everywhere, in a little jewel of an evening that is at once wistful, wry, and deeply touching. Perhaps more than anything, the play (the original title is Léocadia) is very, very French, a sensibility that IRC understands so well. After all, as Parisians especially love to remind us—without style, you’re nothing.

“I live in a different world altogether,” announces the Duchess early on, in what is the understatement of the evening. The entire world of Time Remembered is a highly constructed, elegant mishmash of reality and fantasy. In brief: The Duchess wants to end the heartache of her adored nephew, Prince Albert, who still pines away for a woman he barely knew (that’s Léocadia, a glamorous ballerina who died in an Isadora Duncan-ish scarf mishap). The Duchess’s complicated solution is to bring in a shop-girl, who will essentially play the role of Léocadia in a scenario and setting created to both force Prince Albert to confront his sadness, and to overcome it.

The particular themes here—including an aristocracy losing relevance and vitality; choosing whether to cling to an imagined past, or embrace a messy but real present; and perhaps most of all, the transformative alchemy of love—must have been especially poignant in the France of 1940, when the play was premiered. But they retain their power and charm today.

Still, it’s tricky to get right. Time Remembered could easily turn cloying. What’s so terrific in IRC’s wonderful production is the deft way sentiment is consistently balanced with something more bracing and piquant. It’s not an absurdist play, but true to the company’s mission, absurdist underpinnings are pointedly emphasized. The actors—Corinna Burns, Ashton Carter, Thomas-Robert Irvin, Paul McElwee, Katherine Perry, and Bob Schmidt—commit themselves fully to this vision. As for Brock herself, she should be a Barrymore shoe-in for her dazzling work here.

All the more impressive that this show, with its magically luxe setting, is managed in a tiny space on what I assume is a modest budget. There’s something stylishly French in that, too—true chic isn’t about unlimited resources; it’s about taste and talent. IRC displays ample amounts of both.