REVIEW: In The Brownings, A Pair of Great Romantic Poets Work Blue David Ingram, James Ijames, and Charlotte Northeast in The Brownings at Orbiter 3. (Photo by Plate 3 Photography)

Some famous pictures capture the great actress Katharine Cornell as Elizabeth Barrett Browning in The Barretts of Wimpole Street. Rudolf Besier’s sentimental comedy, a Broadway hit in the 1930s, was genteel and reverent, and even in a still photo, Cornell—backlit like the Virgin Mary or Loretta Young—radiates serene, refined grace.

Sam Henderson’s The Brownings, receiving its world premiere through this Orbiter 3 production, is not that kind of a play.  His Brownings—well, they’re nominally the same pair of celebrated poets, but they’re pretty different, as you’ll figure out early on.  Maybe when Elizabeth gives Robert the gimlet eye and says, “I’m going to fuck the English language out of you.”

Elizabeth here is the wonderfully idiosyncratic Charlotte Northeast, whose quirky edginess has rarely been given such free rein. She’s terrific, as are the other two actors—David Ingram as a droll, slightly nerdy Robert Browning, and James Ijames, twinkling slyly behind a piano, as Robert Schumann (yes, the composer). They, and the entire production, under Harriet Power’s sleek and steady directorial hand, really could not be bettered.

There are some delightful bits, too, in the short, punchy scene-lets. Ijames especially is a stitch, turning Schumann into an early prototype of a Las Vegas lounge act, which brought the house down. In general, the adoring opening night audience ate up the anachronistic overlay (“Dude” is Elizabeth’s favored nickname for her husband) and sense of naughty shock in Henderson’s script. For me, though, after Robert Browning has, literally and metaphorically, shot his wad in the first ten minutes, I wondered where the The Brownings was going. 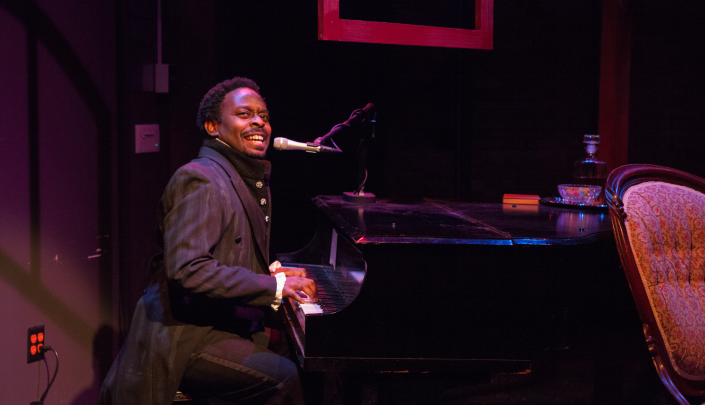 James Ijames in The Brownings at Orbiter 3. (Photo by Plate 3 Photography)

In interviews and director notes, Henderson has minimized his interest in the actual Brownings, but I think he does himself a disservice. There’s evidence of respect and admiration for their work, which is quoted at some length. Midway through The Brownings, Henderson introduces some pretty serious ideas—the impossibility of balancing a personal relationship with the ferocious demands of creativity; competition between a pair of artists (Elizabeth is a better poet than Robert, and they both know it); and the bottomless pit of mental illness that threatens to engulf Elizabeth, whose laudanum addiction is slowly killing her.

But though there’s lovely writing here—by Henderson as well as Elizabeth and Robert—too often he sets us up for something serious, only to sink it with an overload of comic shtick. The caustic wit here is considerable, but the play needs something more. Not the sanctimonious middlebrowness of Barretts of Wimpole Street—that wouldn’t do at all for a hip contemporary audience. Still, since Henderson puts important themes in his play, I wish more often he’d take the high road. He should trust his audience to follow him there; we want to.

The Brownings plays through December 9. For more information, visit the Orbiter 3 website.