THEATER REVIEW: In The Glass Menagerie, The Bare Essentials, but a World Lit by Lightening

Joe Mantello and Sally Field in The Glass Menagerie. (Photo by Julieta Cervantes)

“Yes, I have tricks in my pocket, I have things up my sleeve. But I am the opposite of a stage magician. He gives you illusion that has the appearance of truth. I give you truth in the pleasant disguise of illusion.”

So begins The Glass Menagerie, with a long speech by Tom—the doppelganger character for author Tennessee Williams—who establishes the ground rules for his “memory play.” I can’t think of another theater work that invites us from the beginning to distrust it.

For starters, one might dispute the notion of a “pleasant guise”—sobering, poignant, harrowing (also darkly funny) all capture the tone of Glass Menagerie better. But on a factual level, what specifically should we take with a grain of salt?

I’ve always thought that two great lies run through Glass Menagerie. One is the omission of Tom’s (that is, Williams’) homosexuality, the real reason for his long nights spent away from home. There are vague hints of it—Amanda, his mother, clearly suspects something, though she doesn’t and probably couldn’t bring herself to articulate it. But despite her attempts to get Tom to talk about his life, he never reveals this secret.

The other lie is more complicated, and involves Laura—Tom’s sister, and the play’s catalytic centerpiece. Laura is understood to be crippled, which keeps her from having a normal life.  Williams is more specific in the stage directions—one of Laura’s legs is slightly shorter than the other, he explains. Yet, he also says there needn’t be much done to suggest this in performance.

Here’s where it gets tricky. Just as Tom is the literary double for Tennessee, so Laura stands in for his real-life sister, Rose, who in her early 30s was subjected to a prefrontal lobotomy. It isn’t clear why—this life-altering surgery was an extreme treatment for severe mental disorders, but most accounts suggest that, while Rose was difficult, defiant, and (to the embarrassment of her family) promiscuous, she was certainly not insane. Whatever the motivation, the subsequent effect of the operation was that Rose needed institutional care for the remainder of her life. Also, that Williams, who supported her financially and often visited, never forgave himself for what happened.

As I read Glass Menagerie, we’re meant to understand that Laura’s disability—her “little defect,” as Amanda, her mother, describes it—is a false-front. The limp isn’t what’s holding her back—the real reasons are internalized: darker, angrier, and impossible to fix.

Anyway, that’s what I thought—at least, till I saw director Sam Gold’s altogether extraordinary, wayward, deconstructed, likely-to-be-polarizing production of Glass Menagerie, which is set in what looks like a nearly empty theater. Weeks later, I’m still wrapping my mind around it.

To begin with, Gold handles both of my assumptions about the basic story very differently. Although Tom is played here by Joe Mantello, an out gay actor best known for Angels in America and The Normal Heart, the character’s sexuality seems a less prominent part of the subtext than it did, for example, with Zachary Quinto in the previous Broadway revival of Glass Menagerie.  What is very striking here is Mantello’s age—he’s 54, nearly 30 years older than Madison Ferris, who plays Laura. (This does underscore the sense that Tom is both a character in the play, and a narrator who observes the action from a more distant perspective.)

Ferris’s presence is the other profoundly startling element here. She is a disabled actor—and it’s immediately obvious to the audience, who sees her arrive in a wheelchair and then move onto the stage. Much of what happens in this production should, I think, come as a surprise. But I’ll say this—Ferris’ entrance on the stage is one of the most affecting moments I’ve ever seen in a theater. (If you do want to know more, you can check out this feature article about Sam Gold in a recent New York Times Magazine.) 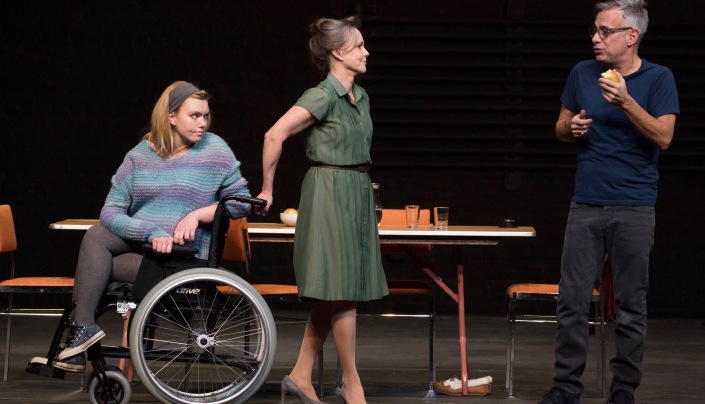 This Laura is a Glass Menagerie game-changer. Ferris is, more than any other Laura I’ve seen, explicitly as Williams describes her (in addition to her physical disability, Tom says she’s “terribly shy,” “lives in a world of her own, and is seen by others to be “peculiar”).  There’s no sense in which this is a metaphor or an excuse—it’s clear that the Wingfield’s family life necessarily revolves around Laura’s care and support.

In this context, Amanda becomes much more sympathetic—a key element in Sally Field’s wonderfully varied and emotionally open performance. Field has built a long career playing characters we love and want to root for—she’s utterly delightful and genuine. But seeing these qualities put to use as Amanda is a considerable surprise.  I give Field a lot credit—she’s played Amanda previously, to significant acclaim, in a more conventionally realistic production of Glass Menagerie.  Here, everything is rethought—and some of Gold’s directorial ideas undercut Amanda’s famous “big moments”—the jonquils speech, for example, or her desperate phone calls to try to sell magazine subscriptions. But Field commits fully to the concept here, and her girlish, flirty gaucheness can also feel like a slap. When she looks at Laura, dressed and waiting for her Gentleman Caller, and says, “this is the prettiest you will ever be,” a gasp went up in the audience.

This sense of trade-offs is a core theme for me in Gold’s interpretation. Many aspects of The Glass Menagerie disappear here. Gone is the historical context (Tom refers to Guernica in this opening speech, but many production details are contemporary); the idea of a Southern family uprooted and inhospitably replanted in the North; and even a basic sense of storytelling through action. (Much of this production looks like we’re watching an early rehearsal in progress, though it’s far more nuanced and subtle than that suggests.)

On the other hand, many aspects of this Glass Menagerie register with a sharpness beyond any I’ve seen. I almost never cry at the theater—here, though, when Tom warns Amanda not to expect too much of Laura—they don’t see her oddness anymore “because she’s ours and we love her”—I teared up, and continued to feel emotionally overwhelmed till the end.  The final images are etched in my mind, and I doubt I’ll ever forget them.  Yet this is also one of the least sentimental readings of the play I’ve seen—which I wholeheartedly support.

Madison Ferris and Sally Field in The Glass Menagerie. (Photo by Julieta Cervantes)

And so it goes. The cohesiveness of all the elements here—and the strength of the acting—suggests that the company is fully devoted to Gold’s take on Glass Menagerie.  In addition to Field and the elliptical Ferris, there’s an intriguingly oddball Jim from actor Finn Wittrock, whose matinee-idol good looks are out-of-kilter with his basic awkwardness. Joe Mantello is a brasher, more contemporary and urban Tom than I’ve seen before, but he’s very effective—and seems to have particular chemistry with Field.

As I write this, the production has not yet been reviewed, though it will be by the time I post it.  Honestly, I have no idea what various critics will think. I can imagine wildly different opinions, ranging from pans to raves.  I have no doubt some audiences will reject it—but I wholeheartedly recommend it to anyone interested in Williams and American theater—and in how canonical works can be rethought in production.

I’m still reflecting on this final paradox: I disagree with most of Sam Gold’s big conceptual ideas—yet I’ve never seen a Glass Menagerie that feels so devastatingly right.

The Glass Menagerie plays on Broadway at the Belasco Theatre through July 2. For more information, visit the production website.