THEATER REVIEW: In Sh*theads, A Bicycle Shop is a Cross Section of America

Don’t take this the wrong way, but if Douglas Williams’ Shitheads were the pilot of a TV workplace comedy (and it’s much more than that) it would be snapped up by a big network, and win Emmy awards for its wonderful cast (Akeem Davis, Charlotte Northeast, David Pica, Harry Watermeier), pitch-perfect direction (by Kevin Glaccum), and fantastic design (Apollo Weaver’s you-are-there set). And everybody would make a gazillion dollars.

Fortunately for us (if not for them), Shitheads is onstage at Azuka, where you can see this funny, touching story up close and personal. Also fortunately, Williams’ play has a lot of layers.

On the surface, it’s the story of a modest Manhattan bike shop called Bert’s, located in the shadow of a similar store with more resources. A motley crew struggle to keep Bert’s in business—they include Alex, the manager (Davis, brimming with energetic comic fire), Izzy, a tell-it-like-it-is female mechanic (the dazzling Northeast), who has worked there for the better part of two decades, and an improbable new employee, Brandon (the endearingly befuddled Watermeier), a college graduate who not long before was fired from an internship in the publishing business. There’s also a weird pothead customer (Pica, pricelessly droll) who shows up from time to time. 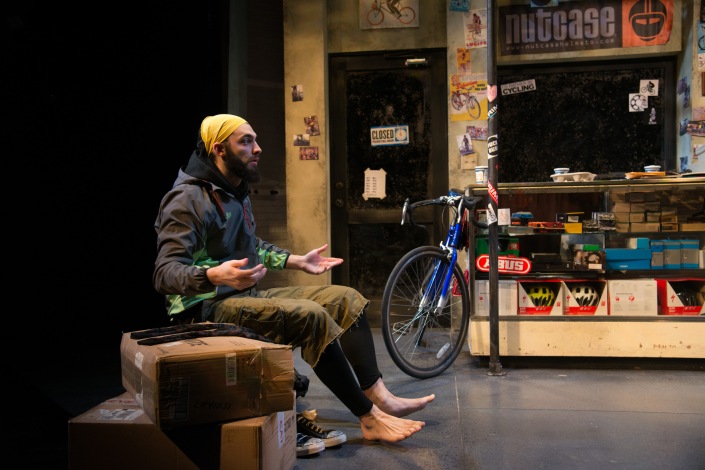 I should admit that I know next to nothing about bicycles, but it sure sounds like playwright does—the dialogue is full of details that have the ring of authority. Better still is Williams’ gift for capturing the patois of this group, as when Izzy laments that all their previous oddball employees have departed. “All of a sudden, we got this Warby Parker motherfucker.”

But the really beautiful thing about Shitheads (there’s a phrase I never thought I’d write) is what it says about America today. On its most poignant level, Williams’ play is a valentine to the disappearing world of small businesses and the people who make them great.

If you’re listening, you can hear the warning: You know that little service shop that you don’t go into because there’s a bigger one across the street? You’re helping to put it out of business—and with it, the work force who dedicate their lives to sustaining a particular industry they care about. They may seem strange—but they’re craftsmen and women who do what they do because they love it.

Shitheads—a terrific world premiere shepherded by Glaccum and Azuka—is glowing proof that, in the arts, too, some of our best work can be in smaller companies. This funny, touching play may be the best 90 minutes you’ll spend in a theater this year.