When I heard Meryl Streep was making a movie about Florence Foster Jenkins, the unforgettable opera diva manqué, I thought it was, potentially, both a treat and trap. Jenkins’ inimitable recordings are a treasured source of (somewhat unkind) pleasure for many, and deserve to be better known; and photos of her suggest she was as much fun to see as to hear. But it could so easily be a one-joke premise, with the unkind factor loaming large.

Happily, Florence Foster Jenkins is far better than I expected.  It’s not a great film. Writer Nicholas Martin and director Stephen Frears have been surprisingly sloppy and inaccurate with musical backstory details. The movie is tonally uncentered, and sometimes veers into broad comedy that isn’t particularly funny.

It is, of course, Streep’s picture — without her, I can’t imagine anybody would have made it.  The giddy society matron was once a real theatrical archetype, but it’s not a completely comfortable fit for her.  She brings her inimitable intelligence and imagination, and she’s always enjoyable. Still, I kept thinking of earlier great actresses — Laura Hope Crews, Marie Dressler, and especially Mary Boland — who did this sort of thing with a lightness and charm Streep doesn’t fully capture. 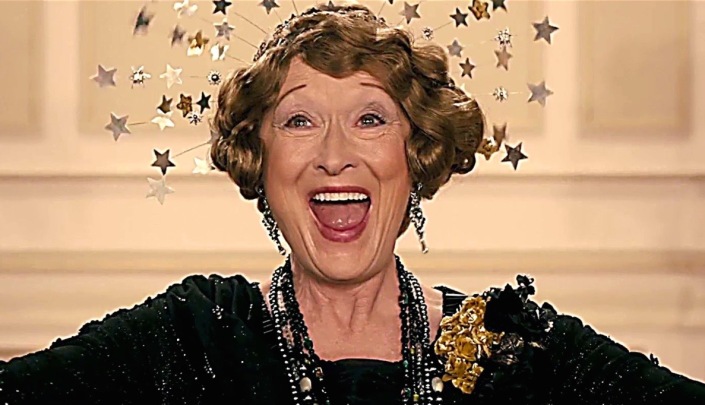 But of course, Streep is a remarkable mimic, and what she does in terms of capturing Jenkins’ singing is brilliant, uncanny — so much so that in final credits, when we hear the real FFJ, it’s difficult to tell them apart.  At times, Streep even suggests the ghostly traces of a real voice — singing “When I Have Song My Songs,” she might almost be an actual recitalist.  (Streep’s early vocal training with Estelle Liebling, who was also Beverly Sills’ teacher, must have helped here.)

What Streep can really do is break your heart.  The opening scene, a deliciously kitschy musicale, with Jenkins’ in the first of many ludicrous costumes, is good fun.  But later, when she talks about what music means to her, Streep pauses, as if unable to speak, and her face takes on the glow of a renaissance religious painting.  It’s those more serious moments that really register.  Walker and Frears commendably portray Jenkins as forthright, plucky, even heroic — and here, Streep is unbetterable.

And to my great surprise, Hugh Grant is her equal.  Still handsome, he’s no longer boyish — and happily, also seems to have grown out of his smugness.  Grant plays St Clair Bayfield (really, you couldn’t make it up), Jenkins’ husband, a role that could so easily be another cruel joke, the lothario with the double-life. Instead, Grant makes him something more complicated. Yes, he cheats on his wife with a younger woman — but he’s also devoted to Florence, and watching Grant as he surveys the room, quietly on the alert for anything that might hurt her, is sweet, and funny, and sad.

The real Florence Foster Jenkins in one of her many costumes

Would that the rest were as good as they are — or as David Haig, in a superbly understated performance as Jenkins’ smarmy voice teacher.  By contrast Simon Helberg (playing Cosmé McMoon, Jenkins’ accompanist and sometime composer) is all smirks and shtick, betraying his sitcom roots.  He’d be far better doing half as much (though he gets points for his piano-playing).  Ditto Nina Arianda, camping it up as another archetype, the brassy Bronx dame with a heart of gold.  Arianda looks like she’s having more fun doing what she’s doing than I’m having watching it.

Still, I’m glad I saw Florence Foster Jenkins, most of all for a reason I didn’t expect — it made me think about her seriously.