THEATER REVIEW: Straight White Men Are Not What You Think 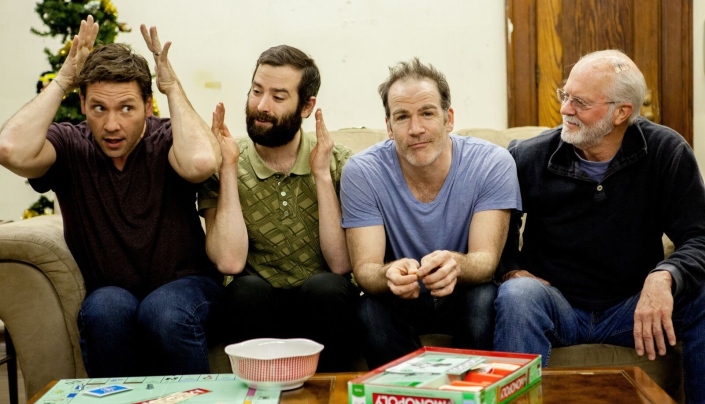 “Oh, great,” I thought, as soon as I read the title. Just what we need — another play about America’s most maligned underclass. (As if David Mamet and Neil LaBute haven’t given us more than enough.)

Of course, I should have known. This is InterAct, after all, a company whose artistic director, Seth Rozin, consistently thinks out-of-the-box about politics and culture. Sure enough, while Straight White Men is, indeed, true to its subject, Young Jean Lee’s complex, often wonderful, probably deliberately destabilizing play is considerably removed from the traditional perspective (starting with the fact that the writer is an Asian female, and known for her experimental work).

You won’t think that initially, though. The set-up — three adult brothers, spending a few days over Christmas with their dear old dad — seems unremarkable. So does the location, a drab, personality-free living room that might be where track lighting went to die. If this isn’t Norman Rockwell, it could be his sad sack, suburban cousin.

Yet soon enough, conversations make an odd turn. What kind of heterosexual men play a game called “Privilege,” a riff on Monopoly that takes on power structures, race, and patriarchy? Or follow the usual male rituals (lots of playful roughhousing; destroying an uncooperative xbox controller) with discussions of self-actualization? More to the point, what kind of straight white male who is smart, capable and highly educated is satisfied with a life of low-stakes temp work?

There are as many questions in Lee’s play as answers, but that’s the point. She riffs intriguingly on both realism and reality; though Straight White Men initially looks very much in the American family drama vein, it keeps veering into another, more blatantly theatrical style (note the hyperextended scene changes that have a parallel life of their own). Realism here is, in a sense, a front — one that is perfectly mirrored by a false proscenium arch framing the stage.

On a deeper note, I think we’re meant to understand that people (yes, even straight white males) are odder and more unpredictable than we think. I also wondered if Lee is satirizing the self-centered grandstanding of Mamet, LaBute and others — probably that’s just wishful thinking on my part, but I do hope so!

Director Matt Pfeiffer unerringly captures the plays pulse and complicated tone; he has a strong cast — Tim Dugan, Kevin Meehan, Dan Kern, Steven Rishard — among whom Kern (as the father) is especially winning. Rishard, playing Matt, the odd-man-out among the brothers, is simply extraordinary. It’s a performance full of vivid internal life even when he seems to be doing very little, and there’s electrifying sense of unpredictability

With Straight White Men, InterAct caps their strongest season in years. Moving to the Drake seems not only to have given the company a new home — it has revitalized them. The existence of this space is due in great part to Rozin’s spearheading the project — surely there should be an honorary Barrymore Award in his future!