THEATER REVIEW: Peter and the Starcatcher at Walnut Street May Be Too Much of a Good Thing 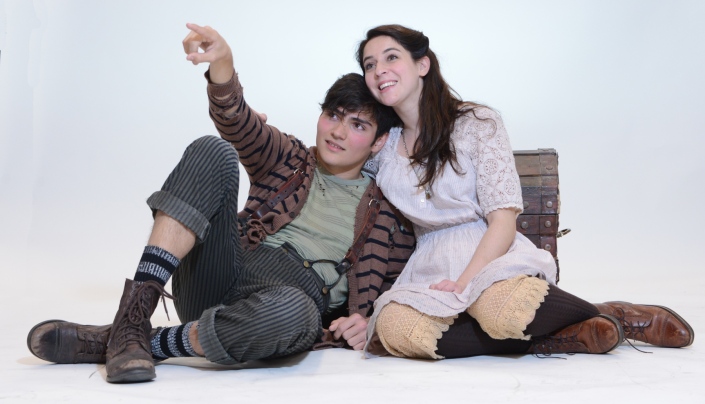 Brandon O’Rourke (Peter) and Michaela Schuchman (Molly) in Peter and the Starcatcher at Walnut Street Theatre.

How you feel about Peter and the Starcatcher — the immensely clever, mind-bogglingly energetic show on stage at the Walnut Street Theatre — may depend on two things: your taste for whimsy, and your ability to keep track of complicated details.

Perhaps you’ve heard that Rick Elice’s play is a prequel to Peter Pan — an attempt to give us a sense of how that story got its start. Indeed it is, and faithful fans of J. M. Barrie’s beloved tale in its many manifestations will recognize connections early on. Elice’s Peter, like Barrie’s, is set in Victorian England, with side trips to exotic isles.

But the main tie-ins occur fairly late in the second act. Before we get there, Peter and the Starcatcher is a thing of its own — or should I say things. Many, many things.

Just the headlines — we follow two voyages by two ships, carrying two identical trunks (though each holds very different cargo). On the human front, there’s Molly, a self-confident young girl born to wealth and privilege, and three poor boys, soon to be sold into slavery — also, a hoard of other folks, good and bad, whose job it is to set everything in motion.

This they do with unflagging skill, in a stunningly varied number of ways, including singing, dancing, playing musical instruments, punning, pratfalling, and milking the audience for all its worth. (In turn, the audience responds uproariously, as they should — this isn’t just the hardest-working ensemble in Philadelphia; it’s also one of the most talented.) Director Bill Van Horn’s production is a glorious hodge-podge of theatrical styles, many of them older than Barrie’s original script, and still effective. Taken together, it’s busier than the January sale at Harrods.

And everybody tells stories. Storytelling is the core of Peter and the Starcatcher. In addition to following the double-narrative described above, it also takes any number of circuitous flights of fancy.

But for me, all the detours and the jokes (some of them very good) ultimately detract from the fundamental story. By the time we get to Peter Pan, it seems almost an afterthought. And though Elice tries to capture the sweet, poignant heart and soul Barrie’s original (which I sometimes think is just about the saddest book I know) — and there are some touching passages — all the hijinks have rather spoiled the mood. (Also, to be honest, Elice’s denouement isn’t quite as neat or clever as it could have been.)

But none of this may matter to you. If it’s sheer entertainment you’re after, you could hardly do better — Ian Merrill Peakes’ brilliant turn as Black Stache, the principal pirate, by itself is worth the price of admission. Even for me, there’s a lot to love in Peter and the Starcatcher.

Peter and the Starcatcher runs in repertory through May 1. For more information, visit the Walnut Street Theatre website.