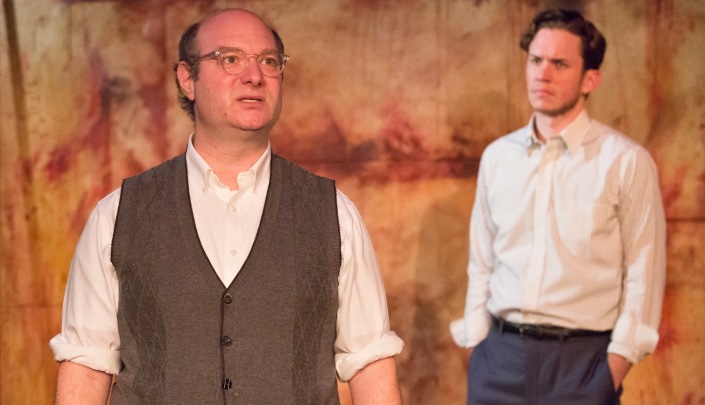 Context can change everything. Four years ago, when I first saw John Logan’s Red, not much grabbed me – until the midpoint, when a wordless scene depicting the artist Mark Rothko and his young assistant, Ken, in the act of priming a canvas had a thrillingly visceral, almost combative power. Suddenly a polite, talky play turned into a Bacchanalian rite. I still think Red won the Tony award on the basis of that scene alone.

The scene is also executed skillfully here at the Walnut Studio. The two actors – David Volin as Rothko, Daniel Fredrick as Ken – throw themselves into it. But it doesn’t have the impact – a more confined stage doesn’t lend itself to the same abandon.

Often, a two character play is better suited to a small space – conversation feels more natural, and the intimate connection with the audience is a benefit. I’d looked forward to seeing this production of Red for just those reasons.

But that intimacy creates more problems than it solves. Rothko was a gigantic figure in the art world in the late 1950s, when Red is set. Here, in a cramped garret more suitable for a student, he seems diminished. (Volin effectively communicates Rothko’s quirky intelligence, but not his withering sarcasm or what Ken calls his “titanic self-absorbtion.”) His paintings – meant to be seen at a distance – have less impact (and are all too obviously not real Rothko’s). Bustling physical activity – mixing paint, stretching canvases, removing and rehanging in-progress works – looks constrained. A sense of grandeur and importance is missing.

There is some payoff in the conversational scenes – but that’s also where Logan’s script is least persuasive. Red is full of contrived speeches about the meaning of abstract expressionism, without ever getting under the surface.  (I wrote about that first production that “culture is dispensed in palatably small spoonfuls, and art history is at a strictly Learning Annex level” – and I think that still holds.) What definitely comes across better here is Ken – a deliberately elliptical figure, Daniel Fredrick makes him consistent and appealing, and he turns out to be formidable opponent.

Seen here, Red emerges as enjoyable but not deep or memorable – and strangely, much of that is a matter of space. Rothko was, in every sense, a large format artist. It’s a disservice to experience him in small room.