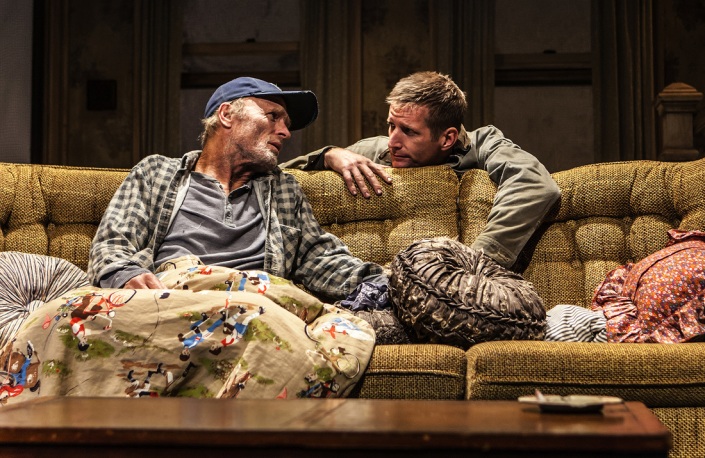 I was introduced to Sam Shepard’s writing when I was in college, and it was love at first read. At that point (mid-1970s), he was better known as a poet – the plays were limited to a handful of one-acts – but already the voice was unmistakable. It’s hard to explain what grabbed me about Shepard – even then, I wasn’t much of a hellion, and still less a cowboy. Yet I was (and am) transfixed by his elliptical, sly language, at once mournful and funny – and by the imagery, a kind of word-landscape graveyard of vanishing Americana. A few years later, when I saw Curse of the Starving Class, I was especially taken with Shepard’s ability to capture something essential about California.

Then came Buried Child, which is set in Illinois (Shepard’s birthplace – he moved westward as a child). The location wasn’t the only surprise – if Buried Child is quintessential Shepard, I also found it perplexing, and more difficult even than his poetry. I remember reading it several times, and each time finding something new. It was a dynastic family saga about moral, spiritual and physical decline across generations; or a wickedly funny marital comedy; or a dark satire about dwindling masculinity; or a parable of disappearing innocence; or… ?

I’ve come to think Buried Child is all that, but I’m still confused about how it should look in production. What is the tone Shepard calls for? How will an audience find their way in?

Having seen Scott Elliott’s production for New Group, I’m both relieved and disappointed to discover I’m not alone. Elliott and his estimable forces haven’t figured it out either.

There are some glimmers, notably in two fine performances – first and foremost, Ed Harris as Dodge, the elderly patriarch. Harris has just the right mix of sardonic wit and underlying menace; moreover, he makes it look absolutely effortless. In an early scene, he’s paired with the compellingly weird and creepy Paul Sparks (playing his son, Tilden) – and for a few minutes, we have just the right balance of drily funny, elegiac, and grotesque. Rich Sommer, as the other son, Bradley, is very nearly as good, though not quite as scary.

But even before this, things go awry. The play opens with Dodge in conversation with his wife Hallie (Amy Madigan), who is heard off-stage. Harris is pitch-perfect here – but Madigan is too cranked up, playing too broadly for comedy. Hallie is one of two female characters in Buried Child; the other is Shelly, Vince’s girlfriend, meant to be a fetching young thing from Los Angeles who catches Dodge’s eye. It’s a tricky role, and here Tessa Farmiga fails to give it the necessary dimensionality – she blurts out her lines as though in a state of unease that seems more an actor problem than an interpretive choice. (Critics who think Shepard’s hyper-maleness results in unconvincing female characters will find a lot here to support that hypothesis.) Nat Wolff, playing Vince, the grandson, similarly disappoints – his haunting closing monologue about decay and regeneration – the most disturbing and poetic set-piece in the show – barely registers.

In the end, despite some good moments (especially Harris and Spark’s really excellent work), this Buried Child fails to convince. Seen here, the 35-year-old play looks dated – far more so, curiously, than either Curse of the Starving Class or True West, the more straightforward plays that immediately precede and follow Buried Child, and which together are often interpreted as Shepard’s “family trilogy.”