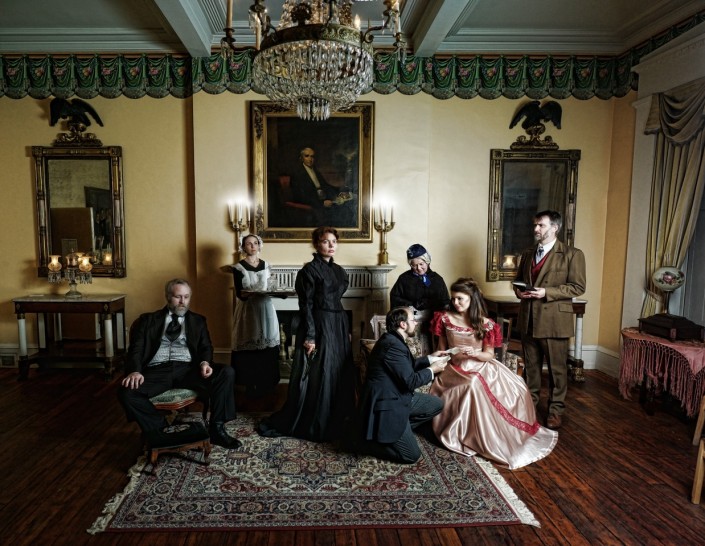 The Cast of Hedda Gabler at Laurel Tree Theater. (Photo by Kyle Cassidy)

Scholars of Ibsen’s Hedda Gabler will continue to debate why the protagonist (that’s Hedda, of course) is so profoundly unhappy. But there’s no doubt she’s miserable, pacing like a caged animal in the elegant home she claims she wanted.

I’ve never seen that sense of containment more vividly depicted than in Laurel Tree’s production, rather daringly performed not in a theater, but in Society Hill’s Physick House. The home could almost have been built for Hedda (the character and the play) – despite its grandeur, we quickly understand how limited her days must seem.

There are, of course, drawbacks to staging a play in a house. Sight lines aren’t optimal; there’s no theatrical lighting, which so often helps establish mood. In fact, the audience is as brightly lit as the “stage.” And, candidly, it’s not the most comfortable seating.

But the payoff is considerable. Hedda is a housebound play, and almost instantly I realized how rare it is to truly feel it. Entrances from off-stage, voices overheard, the sense of intimacy (here often a negative – there’s very little privacy) – all of it registers as real. Actor Jared Reed takes full advantage of small space, playing Eilert Lovborg – Hedda’s object of desire –in a whispery, confiding style that is completely mesmerizing.

Even the proximity and visibility of the small audience (perhaps 30 chairs here) are a plus – we feel like medical students, watching a particularly high-risk surgical procedure. (And anyway, who says an audience is supposed to be relaxed?)

I’ve read and seen Hedda Gabler many times, and always come away perplexed – the play is such an odd mix of startlingly modern and wildly melodramatic. In many recent productions, directors have given way to the melodrama, filtering Hedda through a camp-comedy gloss (including a number of drag performances of the title role).

What director Josh Hitchens does here is harder and more admirable. He and actress Jennifer Summerfield don’t shy away from the melodrama – they give full voice to Hedda, in all her overwrought big-ness. They get some laughs along the way, but (though I can’t prove it), I think it’s what Ibsen would have wanted. There are also tender moments – and scary ones.

In the capable cast, along with Reed, I especially admired Jessica DalCanton as a vulnerable, emotionally appealing Thea. Another revelation here – how thoroughly Thea – not only sweet, but also breathtakingly lovely – throws Hedda, accustomed to being courted, into the shade. (Speaking of lovely, the clothes here are stunning – as you might expect from a show that credits four costume designers and a milliner!)

Back to what makes Hedda unhappy – which, really, is the core of the play. I’ll take a stab at it – for all her status, aggressiveness and grand dreams, she’s ultimately too small-minded and convention-bound to get what she wants; also (and maybe I should have led with this), she’s in the thrall of a succession of men who need – but ultimately betray and disappoint – her. (See what I mean about modern?)

But don’t take my word for it – go see what Hitchens and company have done with Hedda Gabler, in a production that, while not perfect, reimagines the play in part by – hallelujah! – taking it seriously.