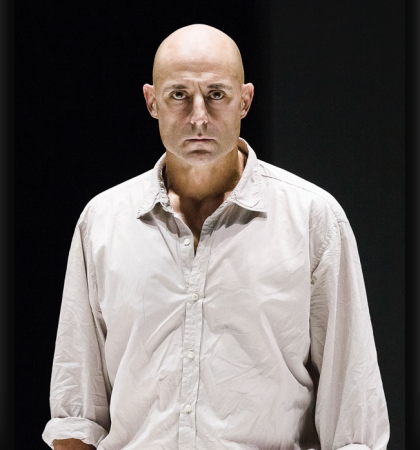 Mark Strong in A View from the Bridge. (Photo by Jan Versweyveld)

I grew up in Miller Time – by which I mean the era when Arthur Miller’s preeminence as the American playwright was a given. Contrarian that I am, I didn’t buy it. For me, even his best plays (Death of a Salesman, The Crucible) lacked the poetry of Tennessee Williams, or the grandeur of Eugene O’Neill. Ideas that Miller assumed were “universal” struck me as narrow, specific to his worldview. More than anything, his self-important pontificating put me off. It wasn’t enough that an audience might infer Willy Loman represents Everyman – Miller had to hit us over the head with it.

In recent years, I’ve had opportunities to re-think my stance. A number of excellent, sometimes revisionist productions have increased my respect for Miller’s work, if never quite changing my mind. Director Ivo van Hove’s A View from the Bridge, which began at London’s Young Vic, is currently on Broadway for a limited run. It’s as good an argument for the play as I can imagine.

View is an oddity for Miller. It’s a generic hybrid that includes some of his predictable polemics (on immigration and the hardscrabble lives of union workers, though he really has nothing substantial to add) – but its core is a torrid melodrama about forbidden sex (Eddie Carbone, a middle-aged longshoreman, is dangerously attracted to Catherine, his wife’s teenage niece). Miller also wants his play to have the stature of Greek tragedy, and he incorporates a kind of chorus speaker (Alfieri, a local lawyer). But it’s really only the sex melodrama aspect that holds our attention.

Still, from that perspective, View from the Bridge – usually directed in kitchen-table-realism style – is effective. Broadway revivals in 1997 and 2010 demonstrated its power.

The current production sets a new standard, and it certainly refreshes the play. What van Hove does – quite brilliantly – is to reduce View to its essence. There are no props, nor any furniture, apart from a ledge surrounding a large concrete box in which the action is staged. The show is performed without intermission, running a taut 110 minutes.

Miller’s political themes remain, but they recede into the background. Two key roles – a pair of Italian cousins who move in with the Carbone family – are portrayed without any accents, minimizing the sense that they’re outsiders. For me, the takeaway is that van Hove is less interested here in differences than in connections. His focus is personal relationships… and betrayal.

His View works so well in large part because it’s done so simply, by an ensemble of superb actors. Mark Strong (Eddie) is a towering, electric presence – it’s nearly impossible to take your eyes off him, even (maybe especially) when he seems to be doing very little. Nicola Walker (Beatrice) eschews handwringing mannerisms – she’s wonderfully genuine and appealing. The captivating Phoebe Fox captures precisely this critical moment in Catherine’s life – perched precariously between childhood and sexual awakening.

Phoebe Fox, Mark Strong, and Nicola Walker in A View from the Bridge. (Photo by Jan Versweyveld)

Two other actors contribute memorably as the cousins. Michael Zegen (Marco) gives a performance that grows in power; and Russell Tovey (Rodolpho) has just the right mix of sweetness and edge – one minute, he’s a dopey-cute kid; the next, a brawny, carnal presence.

Tovey (a Brit) and Zegen (American) are two new additions to the Broadway production. Tovey in particular is clever casting. He’s an out gay actor, whose major recent credit is HBO’s bold series, Looking – and it adds a dimension. In the script, Eddie makes a number of comments impugning Rodolpho’s masculinity; there is in particular a striking moment indicated in the stage directions where this plays out. (I’m not trying to be coy, but I don’t want to spoil it.) 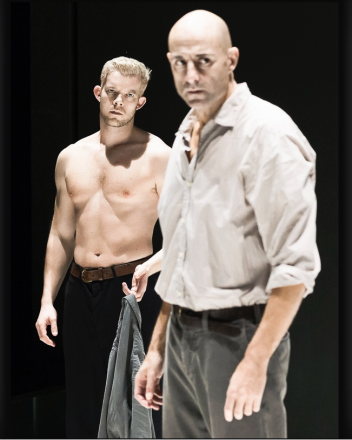 Russell Tovey and Mark Strong in A View from the Bridge. (Photo by Jan Versweyveld)

At its best – as in the Eddie-Rodolpho confrontation – one has the exhilarating sense that van Hove has reinvented View, scrubbing it clean of clichés. But there are a number of new touches at least as overwrought as the traditional ones. I’m not won over by a nearly constant musical soundtrack (some of it from Fauré’s Requiem) that feels too obviously “cinematic” – nor by the final tableau, which is beyond over-the-top. Van Hove hasn’t solved “the Alfieri problem” – the actor playing him barely registers, and the entire Greek chorus aspect seems more half-baked than ever.

On balance, though, this View from the Bridge is a production that should be seen by anyone interested in Miller and his work. It’s always gripping – and at its best, it’s revelatory.