Rebekah Sharp and Bryan Black in Speech and Debate, at Azuka Theatre. (Photo by Johanna Austin)

Let’s be candid from start: Speech and Debate is about hookups – online and in-person – between older men and teenage boys. Not exactly a hot topic for popular entertainment! And when we do see it, almost inevitably it’s cloaked in deepest earnestness. If, for example, this were a Law & Order: SVU episode, Mariska Hargitay would look stricken, ominous music would swell, and there would be sirens and tears.

That’s not how it works in Stephen Karam’s remarkable play, which is noteworthy above all for its almost cheerful insouciance. I doubt you’ll laugh harder – or, perhaps, flush more deeply – than during its opening scene, an on-screen messaging session, accompanied rather grandly by Aaron Copeland’s Fanfare for the Common Man. (Maybe it’s all more common than we’d like to think?)

Here’s what I feel comfortable revealing about Speech and Debate – two high school boys (Solomon and Howie) and a girl (Diwata) unite forces to out a couple of creepy older guys in their town (Salem, Oregon) who are respected authority figures by day, and gay predators by night.

I’ll leave it at that. To say more would spoil Karam’s wonderful, surprising storytelling. I will add only that part of it involves a musical version of The Crucible. (If that doesn’t make you want to see the show, nothing will!) 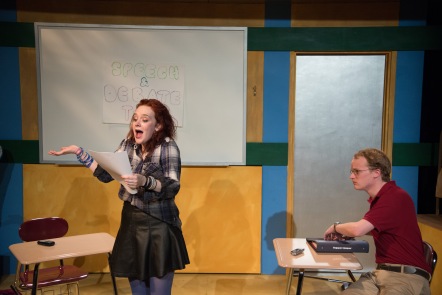 Rebekah Sharp and Dane Eissler in Speech and Debate, at Azuka Theatre. (Photo by Johanna Austin)

Among the many pleasures of Speech and Debate is how well it captures the language of youth-speak. There’s not a hint of condescension here, and Karam gets every charming, cringe-worthy detail exactly right. Take this one tiny detail – that Diwata would be a musical theatre geek who disdains mass popularity, even as she proudly wears a Wicked t-shirt… well, it’s spot-on.

Yet for all its surface comedy, there is both seriousness and pathos in Speech and Debate, which summons the iconic image of Abraham Lincoln in ways that are satiric but also admiring. It’s a short play and a small one – 100 minutes, four characters – but Karam is no lightweight.

Azuka’s production, under Kevin Glaccum’s sure-handed direction, captures just the right energy and verve, though sometimes the touching moments could register more deeply. Among the four gifted young actors, Dane Eissler (playing Solomon, the most serious of the group) is pretty much perfection. Zoe Richards, cast as a teacher and a reporter, is too young, but does a nice job capturing the characters.

As the other teens, Rebekah Sharp (Diwata) and Bryan Black (Howie, the most ebullient) often nail it, but occasionally seem to be trying too hard. There’s no need, since they’re ideal for the roles. One of the great things about this production is the three actors don’t have to pretend to be young – they really are!