The Cherry Orchard (People’s Light, February 2015) — and the Joys and Perils of Chekhov 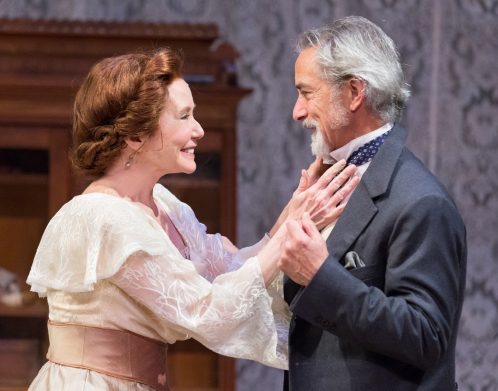 Last week, I saw The Cherry Orchard at People’s Light. Before commenting on that estimable, thought-provoking and often excellent production, please humor me as I share a few more general musings on Chekhov in production – most of which were running through my mind even before I got to the theatre.

I’ve probably seen more Chekhov plays – in more productions – than those of any writer apart from Shakespeare (and perhaps Tennessee Williams). I’ve seen all the major plays, and most of the minor ones; I’ve seen professional productions at all levels, as well as community theatre and college versions; and I’ve seen several of the most famous works, including Cherry Orchard, by American and English companies.

And every time, I come away thinking the same two things – 1) Chekhov may be the greatest of all 20th Century playwrights; and 2) He’s just so damned difficult to get right!

I could go on about this for hours – but here, I’ll focus on what I think are the major issues.

These are, of course, Russian plays, and I’m at a disadvantage in not speaking the language. But beyond the words, the bigger problem is the tone.

This is hardly a unique insight on my part – critics often comment on the disjuncture between what Chekhov referred to as his “comedies,” and what interpreters and audiences often see more as sentimental dramas, or even tragedies. The frequently found stage direction, “through tears,” seems to apply to some of the same lines where characters are also laughing.

I’ll admit I don’t really understand it, but I do believe it’s utterly distinctive, and probably hardwired into the culture. But of this, I’m sure – even for modern audiences used to dark comedies and tonal mixes, Chekhov is a challenge.

Then there’s the problem of an ensemble piece that also demands star power. Most of Chekhov’s plays were written for Stanislavski’s Moscow Art Theatre. They call for large casts, representing communities (families, friends, colleagues), and there are lots of group scenes. It’s essential that everyone seems part of the same world.

Yet, virtually every role is a gem, full of rich detail – and we also want to see a kind of star charisma in many of them.

It’s a tricky balance. The “All Star Chekhov” I’ve seen has almost invariable been disappointing, notably Mike Nichols’ The Seagull in Central Park, which featured Meryl Streep among many other luminaries. Oh, it was glamorous, all right – but no two actors seemed to be in the same play, and ultimately the whole evening felt like an unfortunate collision between a great playwright and The People’s Choice Awards.

Yet Chekhov without standout performances is also missing something.

Can it ever be perfect? In my experience, the closest I’ve come was a 1998 production of Ivanov, directed by Gerald Gutierrez at the Beaumont Theatre in Lincoln Center. Ivanov is generally regarded as minor Chekhov – but in Gutierrez’s deft hands, with a sensational cast of stars (Kevin Kline, Marian Seldes, Hope Davis), somehow this motley crew made you believe they were all in it together, and the balance of comedy and drama felt exquisitely right. (Sadly, the gifted Gutierrez died a few years later, at age 53. Surely, there’s something Chekhovian in that.)

There’s much to be said for People’s Light’s handsome, vibrant production of The Cherry Orchard, which features star glamour (guest artists Mary McDonnell and David Strathairn in the sister/brother leading roles of Lyubov and Leonid), seamlessly integrated alongside the fine company ensemble.

First and most important, director Abigail Adams clearly has a deep understanding of this immensely complex work. Throughout, she firmly etches details – multiple storylines, including old love affairs ending, new ones beginning, and business transactions that will forever alter everybody’s lives – while also painting the larger picture of a graceful but antiquated world, giving way to a more efficient but harsher modern one.

Adams’ also takes note – to a degree I’ve not seen before – of Chekhov’s intent that the play is a comedy. Some of this is very effective – I’ve rarely seen the quick by-play among the smaller characters register so well. 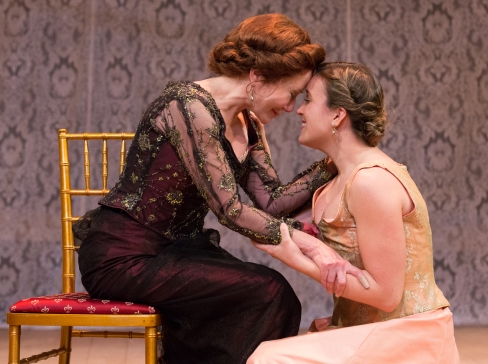 Still, there are many touching moments. McDonnell in particular is responsible for many of them. She’s a fascinating Lyubov – less warm than other actresses I’ve seen in the role, but I’m not sure warmth is what’s called for. What McDonnell brings is something odder – still lovely and alluring, with distracted, breathless fragility that is both appealing and off-putting. She’s well paired with Strathairn, an aristocratic Leonid who is simultaneously bumbling and somehow noble. Among the other actors, there is especially fine work from Peter Pryor, a brusque but sympathetic Lopakhin; Luigi Sottile, louche and smarmy as Yasha, and Graham Smith, a loveable, funny old Firs. (Adams and company use an excellent adaptation by writer and director Emily Mann, which very occasionally sounds too contemporary.)

I have a couple of reservations. A few performances seem in a different, very much more modern world than the rest of the cast – this is true of Pryor; also of the lovely Olivia Mell as Anya. Both are fine on their own, but too different from the other actors in style. (Very likely this is a conscious choice, since the tension between the old world and the modern one is a significant theme in Cherry Orchard, but I still found it jarring here.) Also, for my taste, there’s a too much emphasis on the comedy, which robs a few scenes – the faltering courtship of Lopakhin and Varya, for example – of their poignancy.

Still, this is a production, which, in the details as well as the overall conception, honors both the play, and People’s Light. I left thinking that, surely, The Cherry Orchard is the greatest play written in the 20th Century – and that’s about the highest compliment I can offer. 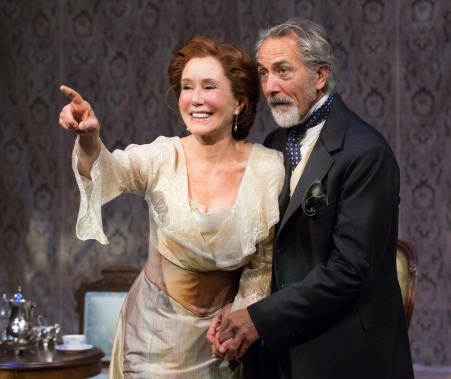