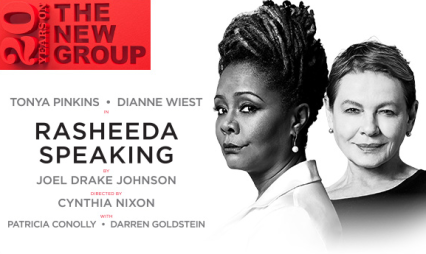 “Can we have an honest conversation about race?”

It’s a question I hear with some regularity in my day job in university student life, and while I applaud the sincerity behind it, I know from experience that it’s not as easy as it sounds, or should be.

So perhaps you can imagine the range of emotions that swept over me as I watched Joel Drake Johnson’s sly, wonderful new play.  My ears and face burned.  I got pissed off, then felt guilty about it.  I giggled, and felt even guiltier.

Rasheeda Speaking pulls no punches and takes no prisoners, yet it’s ostensibly a comedy – and, on the surface, seems simple enough. In a medical office, surgeon David Williams (played by Darren Goldstein) enlists the help of Ileen, one of his office workers.  The doctor is uncomfortable around his other office worker, an African American woman named Jaclyn. Dr. Williams claims Jaclyn won’t look him in the eye, and he is asking Ileen to document the problem, so he can fire Jaclyn and bring in someone more… well, someone who makes him feel more comfortable. 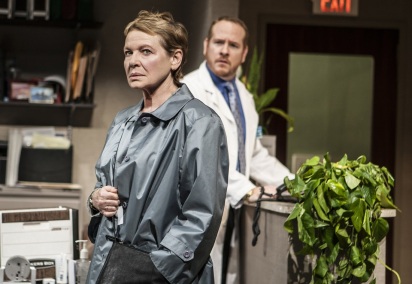 OK, I thought. The doctor is obviously an ass. (Goldstein brings some of the same thinly-veiled thuggishness to this that he uses so effectively in The Affair.)  Moreover, poor Ileen (the superb Dianne Wiest), fragile and meek, is clearly resistant to the plan.

But wait a minute – not so fast. Moments later, we meet Jaclyn (Tonya Pinkins, also marvelous), who turns out to be a real piece of work. Maybe the doctor has a point, after all. 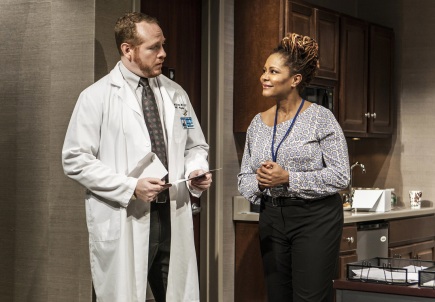 What Johnson’s script manages to expose with sharpness and startling humor is the shockingly gauche ways we all make unaware, casually hurtful assumptions and comments. (Watch particularly a small gem of a performance by Patricia Conolly.) Rasheeda Speaking quietly builds to something climactic – in part, it’s a thriller – while always retaining a plausible sense of day to day work life. In fact, another, equally depressing way to look at this very funny play is that it isn’t so much about race as it is about the spirit-killing, paranoia-inducing world of an American office.

Given the play’s topicality and intimate scale (four actors, 90 minutes), it’s likely to become a favorite in regional theatres. Still, I’m not sure it will have the same impact without the two great actresses who are making it their own in the New Group production. These are difficult roles, requiring a myriad of nuances, and – in both cases – leaving the audience without easy answers.

Tonya Pinkins manages to be simultaneously charming and infuriating, with a superficially smiling manner that also suggests “mess with me at your peril.” If anything, Dianne Wiest is even more extraordinary, in what I think is the harder part – Ileen’s trajectory in the play could seem melodramatic, but Wiest’s fascinating mixture of soft-spoken nervousness and aggression makes every turn seem… not only plausible, but (at least, in the terms of her frayed internal logic), understandable. 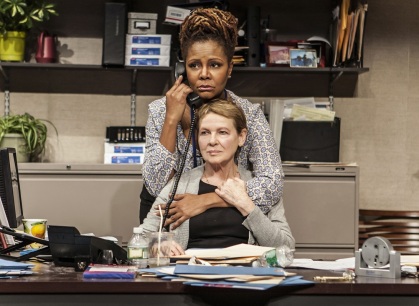 Though Rasheeda Speaking is Cynthia Nixon’s directorial debut, she brings an assured hand to the production, which is impeccably paced and designed (scenery by Allen Moyer, costumes by Toni-Leslie James, lighting by Jennifer Tipton).

I saw a matinee of Rasheeda Speaking, and thought about it for the rest of the day and beyond. In fact, even during the evening performance I later attended, my mind kept coming back to some of the many memorable moments in Johnson’s play, and Pinkins’ and Wiest’s performances.

“Can we have an honest conversation about race?”