DF Considers Into the Woods On Film… And On Stage 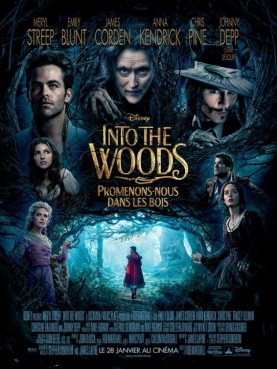 “Slotted spoons don’t hold much soup.”
“The prettier the flower, the farther from the path.”
“Opportunity is not a lengthy visitor.”

To these Into the Woods aphorisms, I would add:

The intersection of childlike hopefulness and middle-aged regret
is not easy to traverse.

Before launching into the film of Into the Woods, I should in fairness probably point out that I’m not one of the show’s biggest fans. I saw the original Broadway production in previews. A few years earlier, I had been dazzled and moved by Sunday in the Park with George, the previous Stephen Sondheim / James Lapine collaboration. I hoped for a similar sense of revelation, but it was not to be.

To me, Into the Woods was chaotic and inchoate. Bernadette Peters wandered around like a star in search of a vehicle, and I sympathized. (Material added later helped flesh out the role.) The show felt like a collision course of ideas – some clever, others less so, but few of them really developed. The fusion of fairy tales made me hope for Bettelheimian insights, but the execution was mostly jokey and confusing. The finale was a medley of platitudes.

More damagingly, the  show’s shifting perspective from youth to battered experience – such an intriguing concept – didn’t really come together. Sondheim’s lyrics can capture many things, but naïveté isn’t one them. On the other hand, perhaps to compensate, James Lapine’s book – and, even more, his overbusy, overdesigned production – laid on the whimsy with a trowel.

I’ve seen many productions since. I’ve come to appreciate a lot of the music and lyrics. Ultimately, though, Into the Woods may not be a show for me.

Into the Woods Witches — Meryl Streep on film, Bernadette Peters on stage

I say all this because it may help explain my reaction to the movie, which I thought was really good – better than anybody could have expected. The show’s hardcore fans may feel betrayed by what isn’t there, but in my case, I probably enjoyed Into the Woods on film more than I ever have before. At the same time – and I’ll admit this sounds perverse, given what I’ve just written – I missed the original.

Let’s start with the good things. What director Rob Marshall has done – maybe for the first time ever – is to find a consistent, cohesive visual style and tone. This Into the Woods is a fairy tale, pure and simple. It feels like one, and it certainly looks like one (the Disney people are, after all, pretty familiar with this sort of thing).

And Marshall has achieved it without sacrificing the more serious themes, which is more than admirable – I’d say it’s astonishing. Of course, there are trade-offs. I doubt movie audiences will understand how much Little Red’s “I Know Things Now,” and Jack’s “Giants in the Sky,” are about sexual awakening (and casting two obviously pre-pubescent actors further neuters this theme). But most of the time, this Into the Woods is Into the Woods.

Likewise, the musical score is more fully realized than I expected. I’m cynical enough to think that much auto-tuning and other post-production studio tweaks were employed, but whatever it took, the end result is a lushly beautiful and quite well-sung performance of nearly all of the score. I wonder if Sondheim’s comments to the press about cuts were deliberately designed to make us fear the worst, so that in the end we’re so relieved? In any event, the only song I truly regret losing is “No More,” but I also think it wouldn’t have suited the Baker of James Cordon, who is a gifted comic, but a more limited singer and actor.

Emily Blunt and James Cordon in Into the Woods

There are missteps, too. Johnny Depp should be perfect as the Wolf, but it doesn’t work. The pimp costume he wears isn’t funny, and also isn’t right for the movie’s more literal take on the story. More generally, Depp’s performance just doesn’t come into focus. (I’m guessing he spent almost no time on the set – he certainly doesn’t feel like part of an ensemble.) Lilla Crawford sings well as Little Red, but there’s no real acting, and much the same is true for Daniel Huttelstone as Jack. Chris Pine and Billy Magnussen are genial but not very prince-like Princes.

And of course, there’s Meryl Streep as the Witch. What to say? She’s marvelous in “Stay with Me,” and many of her individual moments and line readings are terrific. But she botches the rap portion of her entrance (it’s too slow, the rhythms aren’t punctuated, and it’s broken up into sections that defeat the flow). On balance, I enjoyed Streep – but I also came away with newfound respect for Bernadette Peters’s performance, which I may have undervalued when I saw it first.

In fact, that’s true for the whole of Into the Woods on stage. As I said, at the time, I felt that Lapine’s direction didn’t help the show. But nearly 30 years later, and with the recent of experience of seeing the film, there are nuances I can appreciate.

What Lapine’s managed – through his cast especially – was a droll, fascinating layering. Characters seemed simultaneously to be part of a fairy tale and rooted in the contemporary world. It’s hard to explain, but you can see it instantly in the great performances of Chip Zien and Joanna Gleason, who might equally have been the Baker and his Wife – or an affluent married couple from Long Island. (Zien also has an inherently mournful quality that was very touching here.) Peters, too, brought some of this double-edge to the show.

Chip Zien and Joanna Gleason in Into the Woods

As good as Marshall’s more straightforward movie is, that bifocal aspect is gone – and I miss it. Could it be that I’m coming around to Into the Woods after all?