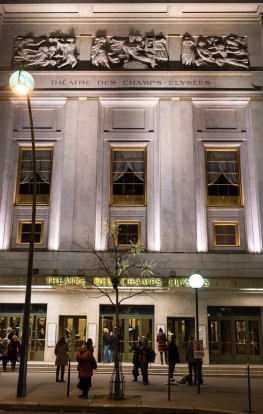 The evening following Clemenza, Simon and I headed back to the Théâtre des Champs-Elysées for our second (and last) event in Paris – a performance of Messiah (billed here as Le Messie, though sung in English), conducted by Nathalie Stutzmann, and featuring her ensemble Orfeo 55 and the Choeur de Chambre Namur.

Yes, this is the same Nathalie Stutzmann who has achieved considerable fame as a mezzo-soprano (perhaps contralto is more correct) over the last 20 years or so. I’ve followed her singing career – which, by the way, continues – with very mixed feelings. I admire Stutzmann’s musicality and tremendous verve, especially in Baroque music; but I have little affection for the basic quality of her vocal tone, which is highly distinctive and idiosyncratic, and (to my ear) often overly dark and lugubrious, or at other times, too fierce. You should judge for yourselves – here’s one example, and there are many more on YouTube:

In fact, Stutzmann sometimes sings and conducts her ensemble simultaneously, though in this Messiah she didn’t. The alto soloist was Sara Mingardo; the others were soprano Susan Gritton, tenor Benjamin Bernheim, and bass Andrew Foster-Williams.

I’m a bit of a Messiah addict, though I indulge this habit mostly through recordings, rather than live performances. In fact, though I’ve attended a number of Messiahs – professional and amateur – in churches, this may have been my first in a concert hall.

I can’t think of another work where the range of recordings so defines our evolving tastes and sense of performance practice. In the last couple of months alone, I’ve sampled many, including Sir Malcolm Sargent (overblown and way too slow – it sounds more like Mendelssohn, though there’s undeniable grandeur), Sir Thomas Beecham’s re-orchestration (vulgar, but exciting), Neville Marriner (small scale, but elegant), Christopher Hogwood (a revelation when it was released more than 30 years ago, though now I think there’s too much sameness in his jaunty tempos), and Emmanuelle Haïm (stylish, if ultimately not memorable). In different moods, I’ve enjoyed all of these and more. When I’m asked to recommend a recorded Messiah, I can’t do it in one. I always mention several, and they may be different, depending on my current thinking, and the tastes and interests of the person who is asking.

Where in all of this does Stutzmann’s performance rank? Very near the top, I think. She’s clearly a scholar of contemporary Baroque performance practice, which shows generally in a vigorous approach to the playing style, and in the relatively small ensemble (24 in her chorus, by the way).

Tempos are mostly brisk. Yet at the same time, Stutzmann emphasizes the dramatic nature of the text. I never felt (as I sometimes do with Hogwood and a few other, more recent performances) that emotional weight was sacrificed for a more general sense of forward momentum. Her depth of feeling was especially apparent in her hushed treatment of “Thy rebuke hath broken his heart” (tenor Benjamin Bernheim was superb here) and the repeat of “He was despised,” where Sara Mingardo sang with a heart-stoppingly beautiful thread of tone. (Though her English was accented, Mingardo made much of the words – only in the “refiner’s fire” section of “But who may abide” did her smallish voice disappear – for this section, I briefly wished that Stutzmann-the-alto would take over.) When breadth and heroism are called for, Stutzmann has it – bass Andrew Foster-Williams, though a bit too baritonal for my taste (I prefer a more darkly colored bass tone in Messiah) was quite thrilling in both “Why do the nations” and “The trumpet shall sound.” The soprano soloist, Susan Gritton, was also excellent – she has a veiled quality that reminds me of Jennifer Vyvyan.

A few more specifics. Simon was ecstatic to discover that there was no harpsichord – the continuo was provided instead by a small chamber organ, and an archlute (the latter played with particular elegance and sparkle). Throughout, the chorus sang with clean, bright tone, and precise diction. (The audience did not stand up for the Hallelujah chorus, by the way – perhaps this is standard in concert hall performances, or just the way the French do it. Or maybe it’s because standing up in the Théâtre des Champs-Elysées is similar to trying to stand up from the economy middle seat on a plane.)

Ultimately, what impressed me most was Stutzmann’s sense of Messiah as a whole, cohesive entity. The timings between movements were clearly part of it – occasionally she’d take only a slight pause, creating the sense of a continuing musical fabric; at other times, the pause would be extended to give additional gravity. I’d never heard anything quite like it. (This ought to be easy to achieve on records, where there’s infinite control – but in every one I can think of, the pauses seem merely to delineate a separation.)

I also have a couple of quibbles. There were a few cuts, including “How beautiful are the feet” and a section of “I know that my Redeemer liveth” – Messiah is a long work, but I want to hear all of it. Ornamentation was largely limited to cadenzas, and I’m partial to hearing more. The soloists had varying approaches to using appoggiaturas – some used none, and only Gritton used them consistently. (Again, I want to hear more.)

But these are minor issues in what was a superb evening. I certainly look forward to hearing more of Stutzmann-the-conductor.