In the summer of 1974, I first heard Frederica Von Stade — Flicka, as she’s widely known — and it was an experience that helped shaped my interest in opera and classical music.  She was not the first opera star I ever heard — I’d been interested in classical music (especially vocal music) for several years by that time, and I’d had the good fortune to hear recitals by some of the greats, including Carlo Bergonzi, Renata Tebaldi, Elisabeth Schwarzkopf, Nicolai Gedda, and Joan Sutherland.  (I saw recitals, since these were the days before Los Angeles really had a home opera company.)  But all of them were older singers, whose presence and personalities seemed very much of another time.

Von Stade, on the other hand, seemed much more a part of my world (in ’74, I was 18 and she was 28).  The concert I heard first was an evening at the Hollywood Bowl, conducted by James Levine, which featured music of Mozart — Von Stade in Cherubino’s arias, and an excerpt or two from Clemenza di Tito; in the second half, she sang “Ch’io mi scordi di te?” which also featured pianist Stephen Bishop, who had previously done a Mozart piano concerto.

It was, all told, a pretty extraordinary evening.  But it was Von Stade who really dazzled me.  I can still remember the first notes she sang — “Parto, parto” — and the instant realization that this was a special voice and artist — distinctive, memorable.

So I became a fan, and I still am.  I should say that, while this experience is unique to me, I know many other fans who feel the same way.  Von Stade, famously the nicest diva in opera, is as universally beloved as any singer I know, and we all feel like we know her!

Over the years, I’ve had the good fortune to hear her quite a number of times, in opera and in concert.

In a couple of weeks, I’ll hear her again, for what is likely the last time — she has come out of retirement to sing in Ricky Ian Gordon’s A Coffin in Egypt, a work he composed specifically for her.  The performance I’ll attend will be very close to exactly 40 years since the first time I heard her — I had just graduated from high school, and she was beginning to achieve international stardom.

I’ll have more to say about Flicka and the upcoming show, but meanwhile I’m celebrating our 40 years together(!) by listening to her wonderful recordings.  Here are a few of my favorites.  (Please feel free to share yours!)

Songs and Duets with Judith Blegen (Sony).  This disc may have been Von Stade’s recording debut — I know that it came out after the Hollywood Bowl concert, and I waited eagerly for its release.  When I did get it, I was thrilled that it captured the specialness in Von Stade’s timbre and style.  It’s a chamber recital, mostly devoted to duets (Blegen, a soprano who is a near-contemporary of Von Stade’s, and  frequent co-star, is delightful).  Von Stade gets a couple of solos, including her first recorded performance of Cherubino’s “Non so piu” from NOZZE DI FIGARO, a role that would become her signature.  Performances, repertoire — it’s a beautiful disc all around.

Mozart, Rossini and Haydn Arias (Philips).  This recording, from a few years after the duets recital, was Von Stade’s first solo disc — and one that showcased her as an emerging star, in repertoire — Mozart and Rossini — she would soon make her own.  Many of these excerpts have been recorded a lot by very gifted singers, and in some cases, I think there are more virtuosic performances.  But Von Stade’s charm and warmth, as well as the gorgeous caramel color of her tone, are in the front rank.  (The Haydn excerpts, pulled from complete recordings, are also lovely, though I think the music itself sounds rather pallid next to Mozart and Rossini!)

French Opera Arias (Sony).  Von Stade was very good at many things, and quickly established herself as a great stylist in the French repertoire (both opera and song), where her excellent command of the language was rare and welcome.  Her light-and-dark vocal color — an alto’s warmth, but with the bright upper extension of a soprano — also really suits this music.  Every excerpts here is a bonne bouche, but my special favorites — at opposite ends of the spectrum — are Mignon’s nostalgic “Connais-tu le pays?,” and Frederic’s gavotte, “Me voici dans son boudoir” from the same opera (but by a different character). 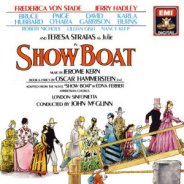 Show Boat (with John McGlinn — EMI).  Another decade, another Von Stade — this time, most definitely not a solo turn, but part of a large ensemble cast.  The recording itself was — and is — one of the great contributions to American musical theatre — McGlinn’s reconstruction allows us for the first time to hear the operatic sweep and grandeur of Kern’s score, which isn’t remotely suggested by either of the films (good as they are in many ways) or any stage revival I’ve seen.  Von Stade is up to every part of the task — not only the operetta aspects of the musical writing, where we would expect her to be at home, but also in the jazzier bits, and in the spoken dialogue. Throughout, she brims with charm and personality.  And the mezzo coloration of her tone makes Magnolia seem a more substantial character than she sometimes does.

My Funny Valentine: Songs of Rodgers and Hart (EMI). If I have a Flicka desert island disc, it’s this one.  Building on her Show Boat status as a go-to performer for American musical theatre, she and John McGlinn offer a program of 17 Rodgers and Hart songs.  Some (“Bewitched, Bothered and Bewildered,” “My Funny Valentine”) are well-known; others (“Bye and Bye,” “If I Were You”) largely unfamiliar — but they’re all wonderful, especially as heard here in (mostly) original orchestrations, done with impeccable period style that somehow even now sounds as fresh as a daisy!