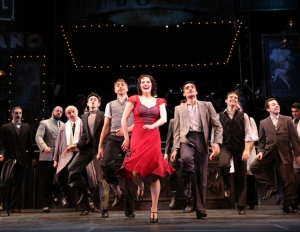 The good news: Encores brought to the party many of their usual virtues, including superlative orchestral playing and conducting, strong casting in the supporting roles, and the astonishing ability to get a staged and choreographed musical up-and-running with less than two weeks rehearsal. (In this case, the production was even more finished than usual, as was John Lee Beatty’s evocative set.)

In its first venture outside the canon of American theatre, Encores turned to France – specifically, Marguerite Monnot’s bittersweet romantic fable about a prostitute and the law student who loves her. In 1956, Irma La Douce was a smash in Paris; two years later (with book and lyrics now translated into English), it was a hit in London. In 1960, it made its way to Broadway (produced by David Merrick, no less), where it ran for more than 500 performances.

The Parisian success I accept on faith – bittersweet is the preferred French flavor profile, and some of what might seem twee to us probably came across in the vernacular as delightfully whimsical. On her home turf, Monnot was a celebrated songwriter, known for her collaborations with the volcanic Édith Piaf. I’m guessing the long run in London also had to do with the European-ness of the piece (perhaps “sophistication” is the word I’m searching for, though little about Irma feels remotely sophisticated to me.)

But the American success is harder to explain. Could it have been Merrick’s brand of dark magic in attracting audiences? The star of the show, Elizabeth Seal, won the Tony (over competitors Julie Andrews, Carol Channing and Nancy Walker!) – is it conceivable she had some brilliant, transformative effect on the material? Was the very idea of Paris so beguiling and unfamiliar in the U. S.? (An opening number, which painstakingly explains French slang, seems made for an audience for whom a croissant was major culinary exotica.)

Because the painful truth is Irma La Douce is a lousy show. The plot – such as it is – strains credibility. The characters are stock. And while Monnot had proven talent as a composer, she’s at a loss to write songs that propel the long arc of a story. What fragile charms Irma may once have had are now imperceptible.

Still, the cast did what they could. Jennifer Bowles (Irma – it’s the only female role) danced and sang skillfully. She was never less than likeable – but rarely more than that, and she didn’t suggest a charisma capable of enchanting a perfectly sane young man to the point where he invents a fake identity that he then “kills off” (don’t bother trying to make sense of this – just move on), all in an attempt to keep Irma to himself.

As Nestor, the infatuated student, Rob McClure labored mightily, throwing himself into the singing/dancing/acting responsibilities with awe-inspiring energy. But the effort was always visible, and his voice is merely serviceable – the one hit song from the show, “Our Language of Love,” wants more tonal allure than either McClure or Bowles could deliver.

In the end, for all their talent and hard work, Bowles and McClure always looked like a pair of dedicated American actors, bravely but unsuccessfully swimming against the tide. Only Malcolm Gets, as the barkeeper who also functions as a narrator, captured the sly, knowing tone and any sense of Frenchness.

But it’s not the fault of the cast, nor of director John Doyle, who, while creating some lovely stage pictures, failed to etch believable characters or to find any narrative coherence. I don’t think anything could defibrillate Irma La Douce.  The real mystery here (talk about bittersweet!) is why Encores would lavish such care on something that is so fundamentally mort à l’arrivée.