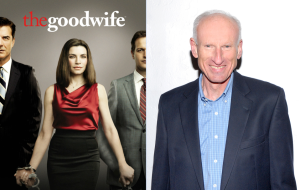 They are two of modern life’s certainties, but still – when death and television collide, it shakes our world, as we saw twice this week.

First (in terms not of importance or seriousness, but audience awareness), The Good Wife lost a major character. (If you don’t want to know more, stop here.) It came as a shock to virtually everyone watching, though apparently the backstage story (an actor choosing not to renew his contract) was not a surprise to the creative team – for them it was a carefully planned exit strategy.

So it’s goodbye to Will Gardner, the lawyer who was Alicia Florrick’s mentor/lover/nemesis.

As Good Wife fans know, this is the second major shakeup within months. The first, involving Alicia leaving her firm to start another, was wickedly amusing, and I presume producers Michelle and Robert King did it because they wanted to. Killing Will Gardner certainly was not fun, and as we can see in an extraordinary open letter from the Kings to the show’s fans (more on that in a minute), they did it because they had to.

Has any show ever reinvented itself twice in one season? – and can they pull it off? I think maybe this one can.

For starters, I thought this was a superb episode: harrowing, touching, and utterly unexpected.

And if it was heartbreaking, it was also (dare I say it?) welcome.Good Wife has always had more than a touch of humor, but recently I feared they were on the brink of turning into an hour-long sitcom. (The highlight of the previous show was Nathan Lane doing shtick in the backseat of a taxicab.) At the end of what will inevitably be thought of as the Will-Is-Dead! episode, we saw a preview of the remainder of the season, which suggests that the coming weeks will give us a mix of tears and laughs, always balanced with the glamorous, high-stakes intrigue that has won so many adoring fans.

Beyond that, I won’t speculate on what this means for the show – we’ll all have to wait and see. Right now, I’m more focused on the Kings’ letter. What an odd and fascinating thing it is! It’s very existence seems to me almost unprecedented – sure, we’ve had explanations/apologies before, but only after there was an uproar from the fan base. This time, the Kings were so sure it was coming, they released their “Dear Loyal Good Wife Fans” missive within minutes of the show’s conclusion. (They were correct, of course.)

They also took the occasion to remind us that while Will Gardner was indeed dead, he is also – and this is good news, people! – a fictional character. The actor who portrayed him, Josh Charles, is “very much alive” and (notwithstanding his decision to leave, apparently) “remains an integral part of our family.” “Life does go on,” the Kings tell us, in closing.

A relief, certainly.  But really – did anybody think it didn’t?  (Is this some crazy bi-product of reality TV – that we have to be reminded that actors and characters don’t exist in the same sense?)

That they are different things was brought home the by news I heard on the same day – that the wonderful character actor, James Rebhorn, died at age 65. It’s especially sad because Rebhorn, who has been acting for 40 years, has recently been more visible than ever. Law & Order fans will know him (his face, if not his name) from many appearances, but he was frequently seen aldo on stage and in films. Lately, he’s been featured as Claire Dane’s father on Homeland. To everything I saw him in, he brought a highly distinctive, intriguing persona that was at once avuncular, and a little odd and unexpected. Reading up on him today I discovered that Rebhorn wrote his own obituary for his church newsletter – it’s charming, funny, bittersweet and self-effacing, qualities I think he also brought to his acting.

So Ave atque vale, Will Gardner and James Rebhorn. I’ll miss you both – but especially Rebhorn. Because he is, you know, an actual human being.