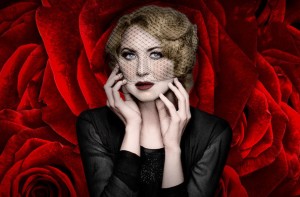 You will see nothing sexier or more arresting this season than the first five minutes of Tales from Red Vienna.  In a nearly silent scene, a woman (we will later know her as Heléna) and a man (Béla, soon to be Heléna’s unpredictable suitor) enact an old story in a way that brims with vitality and subtext.  Even – especially – without words, their actions are absolutely clear.  The audience watches through a translucent curtain of midnight blue lace, which imposes a mysterious sense of distance, and the line that separates polite spectatorship from voyeurism has rarely seemed thinner.

This turns out to be the highpoint of David Grimm’s play, which perhaps is a bit disappointing.   But though the rest of Tales exposes some significant flaws, it’s still something to see – ambitious, entertaining, and above all, clever.

Take the title, for a start.  Of course, it evokes the lush romanticism of Johann Strauss (an obvious play on the title of his waltz, Tales from Vienna Woods).  Yet the “Red” hints at any number of other, less comfortable elements – blood, sex, heat… even communism.

All these topics and more will come and go in the course of Tales.  The play should hold an element of surprise, and as such it doesn’t benefit from a detailed summary, but in brief – Heléna, left widowed and without an income after World War I, must find a way to survive.  (That two of the play’s three acts take place in Heléna’s apartment – and the other in a cemetery – speaks to the desperation that underlies what looks to be her still-comfortable life.)  Among the first sounds we hear are fragments from Viennese operetta.  They are played in the apartment upstairs by a young boy practicing the violin with more enthusiasm than skill, and they annoy Heléna and Edda, her housekeeper (the latter fantasizes about cutting off his hands).  Again, this is Vienna – and Heléna – in a kind of extremis.  The ladies may joke, darkly, about their situation, but it’s no laughing matter.

In Tales, Grimm attempts simultaneously to luxuriate in the gemütlichkeit of old Vienna, and to deconstruct it.  There’s that infernal violin, and throughout, homage can be seen to the strange, sexy social comedies of Arthur Schnitzler; also, to the opera librettos of Hugo Von Hofmannsthal — two of the most ingenious, saddest moments in Tales occur when Béla reads the gravestones of Sophie Von Faninal (dead at age 26) and Zdenka Waldner (gone at 19).   There are also echoes of Ibsen —women seeking to attain a kind of freedom they don’t quite understand.

The overarching ideas in Tales are grand and complex, lofty in the best sense.  If only the internal conversations were up to it!  Too often, Grimm lets things down with dialogue that feels flat and trivial.  (Even the smallest conversations here need to convey the sense that stakes are high.)

Perhaps this explains why director Kate Whoriskey’s work looks so grandly confident in her sense of staging and visual sweep, but curiously half-baked elsewhere – including her work with the actors.

Tales marks Nina Arianda’s return to MTC after her triumph in Venus in Fur.  She’s a presence – her interesting-rather-than-beautiful face, with it’s broad cheekbones and wide-set  eyes, is fascinating to watch (she looks European, if such a thing is possible), and she’s ravishing in Anita Yavich’s costumes.  She’s also a lively, emotionally giving actor – but as soon as she opens her mouth, the illusion is over.  Arianda’s speech is utterly contemporary urban casual – in the more dramatic moments, it’s hard to take her seriously.  (Ultimately, this role – and the way Arianda plays it – are uncomfortably similar to Venus in Fur.)

I think it’s likely that Arianda’s mannerisms are encouraged by the director, and that Whoriskey is after a kind of intentional, layered blurring of contemporary and historical, European and American.  (Kathleen Chalfant plays Edda, the housekeeper, with a non-stop stream of dry wisecracks – she’s about as Viennese as Thelma Ritter in All About Eve.)

The problem is that these performances don’t seem placeless and timeless – they are very much anchored to America today.   Only the excellent Michael Esper (Béla) finds a convincing way to seem simultaneously part of both worlds.   (He’s also weird, off-putting, and sexy as hell.)  Tina Benko is terrific as Mützi, Heléna’s friend (not quite the word).  The character is meant to suggest the affluent Vienna of pre-WWI, and Benko’s more stylized performance does exactly that.

What else can I add?  The production is visually sumptuous – If MTC ever has a warehouse sale, I’ll be the first person in line, looking to buy bits of Yavitch’s costumes and John Lee Beatty’s set.  Though I’m not completely convinced by Tales, I found it more thought-provoking than several other, more cohesive plays I’ve seen recently.  (I should also add that I saw an early preview – often things improve during the process.)