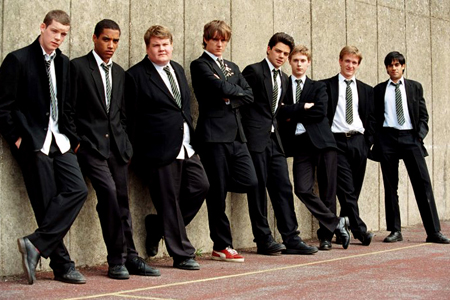 Ahhh…ahAhahAhahAh!  That’s Tarzan’s voice you hear, bringing to a heavy landing the corporate musicals season of ’06-’07.  Others included the vampirical, schmaltzy LESTAT, dead at 39 performances; also RING OF FIRE, a Johnny Cash tribute that was doused after 57 performances.   (The Disney-produced TARZAN, though, is playing to near-capacity crowds despite mixed reviews, and is expected to continue swinging for some time.)

And, as usual, it’s risky to go to the Great White Way searching for Great New Plays.  With a few exceptions (see below), it’s mostly revivals – some inspired (FAITH HEALER with Ralph Fiennes and Cherry Jones), others inspired by schlock movies and TV (Julia Roberts in THREE DAYS OF RAIN, David Schwimmer in THE CAINE MUTINY). The ultra-weird FESTEN (like a cross between Strindberg’s DANCE OF DEATH, and MY NAME IS EARL) came and went without much notice.

Still, there’s some good news, too.  Below, two plays and one musical – all bejeweled with Tony nominations – that would make for a terrific long-weekend of theatre:

THE LIEUTENANT OF INISHMORE, Lyceum Theatre, 149 West 45th Street, (212) 239-6200.  Now playing.  A real winner, though not for the feint of heart or stomach!  Playwright Martin McDonagh’s blackest-of-comedies references the IRA, Greek tragedy, and contemporary familial bickering, as it traces a cycle of violence initiated with a mutilated cat.  Along the way, there’s lust, violence galore, and one of the best star entrances in recent memory.  McDonagh is a one-man high-wire act with a take-no-prisoners attitude to characters and audiences – not everything works, but as the show gets more improbable, it also gets better.  Director Wilson Milam milks every ounce of humor and gore, and the cast (especially David Wilmot as the chief hothead) is splendid.  But it’s McDonagh’s language and imagery we remember.  Ultimately, what I like most about LIEUTENANT is that it takes one of modern theatre’s most tiresome themes – the sad, wee lives of lyrical Irish folk – and turns it on its ear.

THE HISTORY BOYS, Broadhurst Theatre, 235 West 44th Street, (212) 239-6200.  Limited engagement: performances through September 3, 2006.  Alan Bennett’s comedy about an English prep school arrives from the Royal National Theatre, with its original production (including cast) intact.  BOYS is now the critical darling of two continents, and who am I to disagree?  Indeed, the second half has some quite wonderful writing and acting – funny, touching, memorable.  I’m less won-over by the first act, which feels a trifle hackneyed (does there have to be a funny fat kid in every play about schoolboys?), and sometimes resorts to epigrams that sound deep but aren’t.  There is a topic of real interest here, though – the nature of education and its application – and Bennett shows off virtuoso skills.  So do Nicolas Hytner, who directs, and a fine cast headed by veteran Richard Griffiths.  (For me, the truly great performance is by Frances De La Tour, who plays the sole female teacher.  At once sardonic and sensitive, De La Tour does more by tilting her head than other actors do tying themselves in knots.)  Be aware that BOYS is a special interest piece – if the antics of coddled high school boys desperately seeking Oxbridge admission isn’t your thing, I’d recommend you pick another show.

THE DROWSY CHAPERONE.  Marquis Theatre, 1535 Broadway, (212) 307-4100.  Now playing.  The latest critical and popular musical hit is a zippy charmer in which a funny, curmudgeonly Man in Chair (that’s the character’s name.  Really.) shares with us his affection for a 1920’s Broadway musical – the mythic, titular DROWSY CHAPERONE.  In many ways it’s immensely clever – also superbly performed (especially by Sutton Foster, a genuine theatre star in the making).  CHAPERONE has all the color, energy and bounce you could want.  So why do I still feel cranky?  Maybe it’s because the meta-musical (DC, that is) looks and sounds nothing like an actual ’20s show (starting with the virtual impossibility of a complete original cast recording dating from that era).  Also, this feel-good piece is fundamentally about how old homosexuals end up sad and alone in squalid apartments, listening to musicals instead of having sex.  (Perhaps it wasn’t the ideal treat for two weeks before my 50th birthday…)

Of course, hope springs eternal – and so does theatre.  Already critics and other people are making plans for the summer and beyond.  As you look at your calendar, here are some events to consider:

MOTHER COURAGE (Shakespeare in the Park: August 8 to September 3, 2006).  The New York Theatre scores a major coup, luring Meryl Streep to try her hand at one of the all-time great female roles.  Tickets are free, but you need to line up – in the case of this show, probably for 24 hours or longer. (Information at: www.publictheater.org)

GREY GARDENS (Walter Kerr Theatre, October 2006).  This musical about a pair of Jackie Kennedy’s creepy relatives got some rave reviews off-Broadway, especially for Christine Ebersole’s performance.  She’s back, and the show is en route to Broadway.  Call Ticketron: (212) 239-6200.