REVIEW: In Completeness at Theatre Exile, the Bumpy Road between Comedy and Science 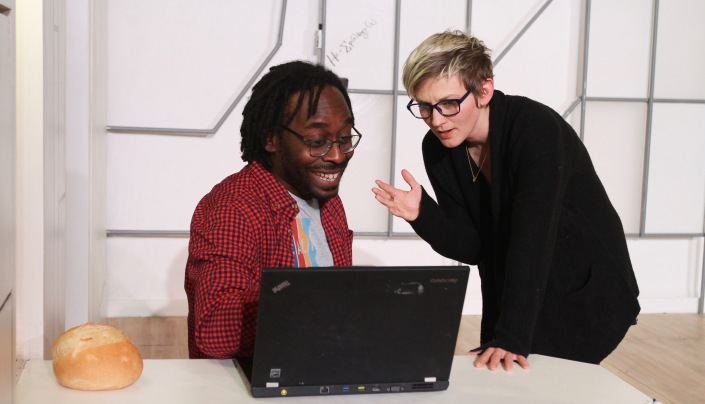 A delicious theater anecdote alleges that at an early performance of Death of a Salesman, one audience member, experienced in the trade, witnessed Willy Loman’s devastating end and whispered sagely to his audience mate, “Ah, yes. New England is a tough route.”

The entertaining but meandering Completeness is a very different play—showy Stoppardian erudition rather than Millerian moralizing appears to be playwright Itamar Moses’s goal. But stick with me for a moment.

Young scientists Molly (Mary Tuomanen) and Elliot (James Ijames) meet in a lab and discover they have complementary interests. Molly, a molecular biologist, is researching the properties of yeast culture, but runs into difficulties analyzing her data. Luckily, computer geek Elliot knows just what to do. Molly is facing the Traveling Salesman Problem (TSP), Elliott explains. Briefly and crudely: that too many routes take too long for even sophisticated technology to process, thus derailing the possibility of a solution.

Yeast may seem an unlikely conversational topic to get a rise out of (ba-dum-bum), but Molly and Elliot’s attraction is quick and thermodynamic.

As their initial spark deepens, soon they must also confront their own messy trajectories in the form of complicated relationships already in place. Hers is with her professor/advisor (played by Justin Rose); his with a fellow graduate student (Claire Inie-Richards). 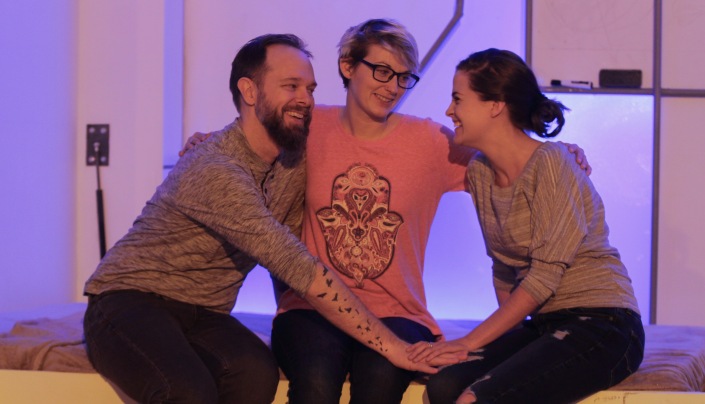 And therein lie the seeds of dramaturgical trouble. Completeness wants to be both a virtuosic display of scientific knowledge and a crowd-pleasing romantic comedy. I’m not enough of a scientist to know whether this is theoretically possible. But I am a theater critic…and I know that here, Moses doesn’t pull it off. The one keeps clashing with the other, leaving neither fully developed.

That Completeness is often entertaining—the opening night audience laughed a lot—speaks to Moses’s considerable skill at character and comedy writing. There are some funny moments, and near the end, even a few especially welcome poignant ones. That side of Completeness could have made a fine movie vehicle (I imagined it for the Jennifer Aniston and Greg Kinnear of a decade or so ago.)

But the admixture with science feels too much like Moses attempting to show off. It also neutralizes the impact of the relationship story. At less than 100 minutes, the show feels overextended.

In fact, Moses has shortened and considerably revised Completeness from the version seen in New York in 2011. There are signs here—particularly in some metatheatrical hoo-ha that is stuck on at the end—that this version remains insufficiently polished.

Theater Exile has lavished exceptional resources on Completeness, starting with the actors. Tuomanen and Ijames, charismatic individually, are even more so together, and both possess the rare combination of intellect and charm the roles need. She in particular, with her tangy combination of sardonic wit and vulnerability, is well-nigh perfect.

Ijames could be, too, though he and the other two sometimes push too hard on the comedy. Director Matt Pfeiffer provides considerable energy and sparkle in a visually imaginative production—Colin McIlvaine’s clever scenery (adapted from a design by Darcy Scanlin) gives a performance of its own—but the show would benefit from a more relaxed and contemplative tone.

Mostly though, it’s the script that lets them down. For all Moses’s enthusiastic interest in the Traveling Salesman Problem, he has missed its central metaphoric tenant—attempting to follow too many roads leads everywhere and nowhere.