REVIEW: In Turning Off the Morning News, Christopher Durang Returns with a Bang 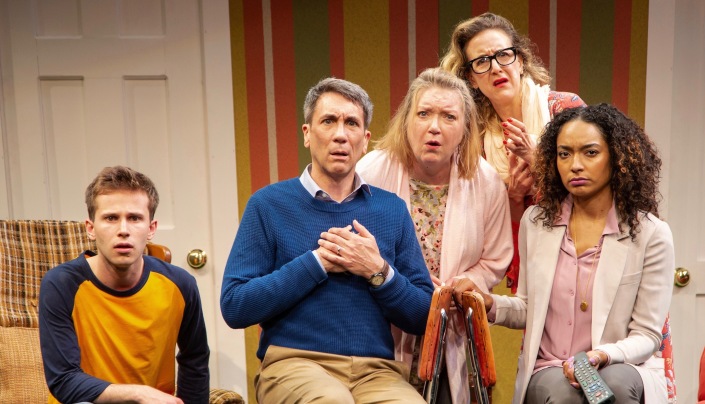 Let me clarify. Durang has been far from MIA. Though it’s been six years since his last premiere, Vanya and Sonia and Masha and Spike—which also started at McCarter Theatre—that one was a major success, probably his most popular work to date. Vanya won Tony, Drama Desk, and New York Drama Critics’ Circle Awards, and quickly became one of the most performed new works in regional theater. Vanya found the famously mischievous playwright in a reflectively sentimental mood, which clearly resonated with audiences.

But where was the acerbic bite that for me was the essence of Durang? Of course, we all evolve over time—he has as much right as any of us to mellow gracefully. Still, I hoped we hadn’t seen the last of the sharpness I so loved.

Happily, I can affirm that the brilliantly caustic wit is back in peak form. You might even say that with Turning Off theMorning News,  Christopher Durang returns with bang.

In a picture-perfect suburb (Beowulf Boritt did the terrific set), all is not well. Jimmy, a middle-aged, disgruntled resident (actor John Pankow, superbly blending comedy and menace), confides to the audience that he’s depressed, and it won’t end well—maybe he’ll die, maybe others will… but one way or another it’s going to be bad.

And we’re off to the races. Next we meet his wife, Polly (Kristine Nielsen, virtuosically demonstrating why she’s a favorite Durang muse) seems more troubled by the location of her potted plant than the mental health of her husband. Clearly, their shy son, Timmy (Nicholas Podany, likewise terrific), doesn’t stand a chance.

For the next 90 minutes, we follow this family and other suburban residents, as they attempt to navigate their way in a complicated, seemingly irrational world. Rosalind (the very funny Jenn  Harris) lives in perpetual fear of sun damage. Clifford and Salena (Robert Sella and Rachel Nicks, both good) seem like the only sane ones in the group—but Cliff, as he movingly tells us, is easily susceptible to generalized anxiety (it’s he who gives the play its title).

As they say in TV Guide, hilarity ensues. Durang’s mastery of the sabre-edged one-liner is in top form. (One among many that I laughed at for minutes – Polly, worrying about husband Jimmy, recommends that he needs medication, explaining, “I think you’re beyond St. John’s Wort.”)

The writing, acting, and Emily Mann’s slyly whimsical-with-a-vengeance direction keeps us laughing so hard that it’s easy not to notice the seriousness beneath Morning News. But make no mistake—this is one ballsy little play. School shootings, mall rampages, and the generally dire state of our collective sanity are all on stage, as Durang gleefully, defiantly thumbs his nose at trigger warnings. Morning News here isn’t Turned Off—it’s turned on its head.

It follows that the show won’t be for everybody. If, for example, you don’t think Eat Pray Love is unadulterated rubbish, or if you don’t think that a home-schooling assignment to write a report on The View is a sure way to drive a 13-year-old boy to psychosis, this may not be your thing.

I, on the other hand, loved every minute of Turning Off the Morning News. Preach on, Mr. Durang—you are doing God’s work.