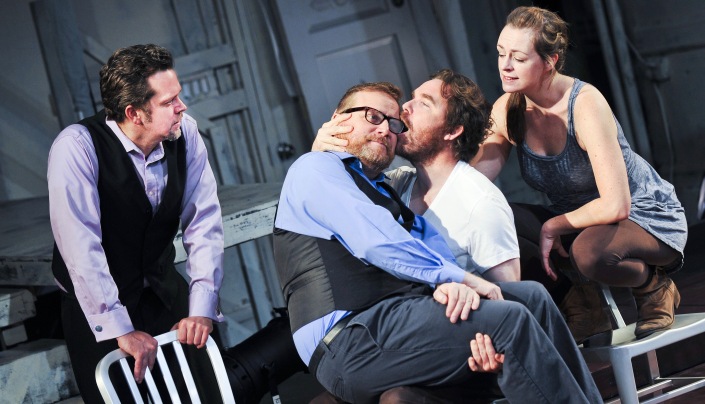 Is there a unifying theme that brings together Shakespeare’s Hamlet and Shaw’s Saint Joan?  I didn’t find a rationale in the press materials for Bedlam’s idiosyncratic, energetic, and often illuminating repertory pairing, now on stage at McCarter Theatre. Not that there needs to be—these are two of the greatest plays in the English language, justification enough for doing them.

Having seen them together, I think there is an inspired logic. The two plays focus on central characters who exist simultaneously inside and outside the action—through their insightful, distrusting eyes, we recognize the elaborate conflicts that plague both regimes.

This pointed sense of purpose is especially noteworthy in the pared-down directness of Bedlam’s productions, which are in some ways quite different from one another, but also share key features. The stagings are lean and contemporary, with a few marvelous effects (particularly the ghostly world of King Hamlet) coming from simple means. An ensemble of four actors—Edmund Lewis, Andrus Nichols, Tom O’Keefe, and Eric Tucker—play all the roles in both plays, a Herculean display of endurance especially on marathon days when they are presented together. (That’s how I saw them, and I recommend it, if you can.) A portion of the audience is seated onstage in a shifting configuration that alters perspective; it provides a good solution for the large-scale group scenes that are important in both Hamlet and Saint Joan.

Bedlam’s actors also take advantage of the onstage viewers with clever interplay. In Hamlet, this evokes a contemporary riff on the groundling audience, and in both plays it lightens the tone. You’ll see few productions of Hamlet that emphasize the humor as much as here, which makes it fun to watch for its three-plus hour running time (Saint Joan is almost as long), and it’s not misplaced—indeed, there is a lot of comedy in both plays.

There are drawbacks, too, in the productions. Frankly, I think the acting is hit-and-miss. The single strongest performance—Edmund Lewis’s silly but touching Polonius—is in Hamlet, but elsewhere, while the cast all parse the verse skillfully enough, they rarely make the kind of indelible impression with specific words and ideas that I associate with great Shakespearean interpreters. This is especially the case with Eric Tucker’s lightweight reading of title role.

Saint Joan, a play far too seldom done, gets the more intriguing treatment here—but Bedlam’s clever reinvention is less audacious than what Shaw actually wrote: a 15th century history play which is treated as a virtuoso drawing room comedy. There’s considerable mugging from the supporting cast, though Andrus Nichols is a lovely Joan, stronger on her forthrightness than her mystery.

Reservations aside, this tour-de-force from Bedlam should be seen by serious theatre fans of all generations. Remaining performances have the individual plays in rotation, as well as two marathon performance on the weekend. Check the schedule for details, and book now—at the performance I saw, Hamlet looked to be sold out, and Saint Joan also had a large and enthusiastic audience.