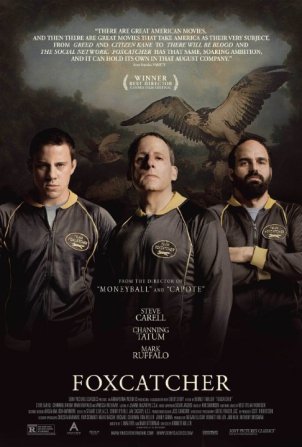 It’s not a wrestling narrative you’re likely to get from John Irving, nor a chapter of Du Pont family history you’ll hear on a tour of Longwood Gardens. But this strange, sad, true story makes a riveting movie – probably my favorite after Boyhood among those I’ve seen this year. (Birdman is still to come.)

In the 1980s, John Eleuthère Du Pont, scion of one of America’s wealthiest families, decided to finance and become chief coach to America’s Olympic wrestling team. For most anyone else, this would have been a grandiose pipe dream, but with Du Pont’s money, it was attainable – or at least, it should have been. Instead, Du Pont murdered one of “his” wrestlers (who was also the brother of another), and spent the rest of his life in prison.

What motivated the murder remains unclear, especially in the movie — I think, in part, that the filmmakers may have had to tread lightly around potential legal issues. (While it seems obvious that Du Pont’s interest in wrestling – more specifically, in wrestlers – was homoerotic, for example, that’s hinted at but not spelled out here.)

Such ambiguity might have hurt Foxcatcher, but instead it strengthens it. Director Bennett Miller and screenwriters E. Max Frye and Dan Futterman aren’t really doing a murder story. They’re more interested in character and mood. Miller and Futterman previously directed and wrote Capote, and like that great film, Foxcatcher comes at the story not head-on, but from an angle.

What that means here is that Foxcatcher is less a crime drama or a wrestling movie than a rumination on the bonds and betrayals of family. Du Pont’s formidable mother (Vanessa Redgrave) belittles his achievements. Wrestler Mark Schultz (Channing Tatum) is inevitably in the shadow of his brother, Dave (Mark Ruffalo), whom he both admires and resents.  Dave needs to find a life that includes both wrestling and his beloved wife and kids.

The film’s pace is deliberately, poetically slow. Miller spends considerable time exploring the scenery – slow camera pans over sumptuous Du Pont homes and breathtaking scenic vistas. All this prosperity might be envy-inducing, but it isn’t – the elegiac tone makes us understand implicitly that something is already dying. If there’s a flaw in Foxcatcher, it’s treating the story and the Du Ponts too much as metaphors for a more general American dream derailment, which is overreaching. 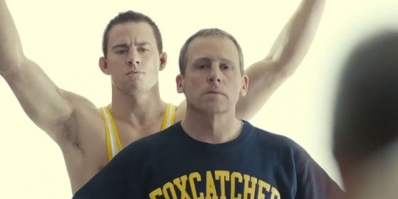 Still, Foxcatcher is a compelling movie that you’ll think about long after it’s over. The actors alone make it worth watching, though the one that’s getting most of the attention – Steve Carell as John Du Pont – doesn’t convince me. Carell is unrecognizable in that way that automatically suggests Oscar buzz, with a huge prosthetic nose. But more than that, the upper part of his face is nearly immobilized – which, along with a flat, disembodied speech pattern, are the signatures of Carell’s performance. It’s certainly creepy, but I think he’s mostly letting the make-up do the work. (And it’s not all that much like the real John Du Pont, who can be seen here – he’s equally scary but less robotic.)

The rest of the cast is terrific. It’s easy to take Mark Ruffalo for granted, because he does this sort of thing so frequently – but also so well: there’s a genuineness about him that’s entirely winning. Vanessa Redgrave has only a couple of scenes, but even with minimal screen-time, she’s A Presence. And Channing Tatum is superb – for all the superficial appearance of brooding hulkiness, his vulnerability is always perceptible. It’s an assured, touching performance – one that should convince any holdouts that Tatum is a real actor, and – potentially – maybe even a future Stanley Kowalski.